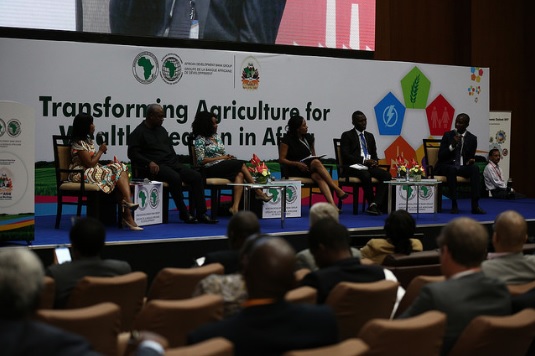 The meeting, which runs through Friday, will focus on India’s partnership with African nations in key development areas, with a primary focus on agriculture and wealth creation. “India is an inspiration to Africa, in that its Green Revolution took just three years,” Adesina said Monday.

“That was in large measure due to the power of political will,” he added, “and you will see much political will on display here at the Bank Group’s Annual Meetings in Ahmedabad in the next few days.”

Key future directions for India and the AfDB include collaboration on infrastructure and energy projects, health sector development, and support for enterpreneurs and small businesses.

In conjunction with the annual meeting, AfDB released its African Economic Outlook (AEO) 2017 report on Monday. The report is optimistic about rising commodity prices driving the continent’s economic growth in 2017 and 2018, while noting that factors including China’s sluggish economy, the overall global slowdown, and the prolonged conflict in Libya have contributed to uneven performance in 2016.

Among the report’s recommendations is an emphasis on improving intra-African trade, noting that Africa’s global trade has improved on the basis of infrastructure, policies and regional integration – measures to be applied between African nations as well. “These achievements ease business by reducing the costs and time required to move goods and services within countries and across borders; they also increase the continent’s appeal as a partner in global trade,” the report said.

To view and download the African Economic Outlook (AEO) 2017 report, see this link.