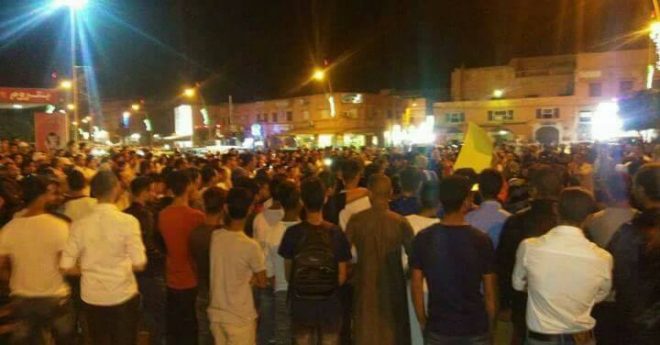 Protests and rallies spread across cities in Morocco on Sunday as thousands of people showed their solidarity with activists who earlier took to the streets in Al Hoceima, in demonstrations on Friday that led to the arrest of some two dozen people.

Rallies in cities including Casablanca, Nador, Beni, Tangier, the restive Imzouren, and at the parliament building in Rabat followed the clashes, as Moroccan authorities issued an arrest warrant for popular activist Nasser Zafzafi, according to TelQuel news outlet. The warrant was issued after the leader interrupted Friday prayers at an Al Hoceima mosque; authorities initially said he was in custody, but family and friends disputed their account.

Zafzafi, the face of the emerging “hirak” popular movement – an abbreviation for Al-Hirak al-Shaabi – has reportedly called on supporters to hold peaceful protests in Moroccan cities pressing for reforms. There are reports that in some locations, authorities are shutting down rallies and dispersing massive crowds by force.

Al Hoceima has been at the center of Morocco’s unrest since the October 28 death of Mohcen Fikri. The fish market vendor was crushed to death in a trash truck while trying to salvage his wares after police threw out his market goods. That case led to charges of involuntary manslaughter and forgery of public documents filed against 11 people implicated in Fikri’s death.

Anthropologist Miriyam Aouragh has described the Al Hoceima uprising as the “unfinished business” of Moroccan “Arab Spring” activists, and some on social media have been calling the latest wave of widespread demonstrations the “new February 20,” referring to the movement of 2011.