Home>CUTTING EDGE>Russian space scientists find 'microscopic Madagascar' on ISS surface
By AT editor - 31 May 2017 at 9:49 pm 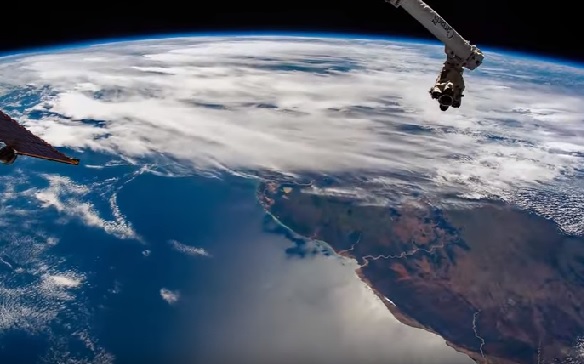 There are tiny pieces of Madagascar in orbit, and Russian scientists on the International Space Station (ISS) think they may be evidence for why the upper limit of Earth’s biosphere could be raised higher.

Russian cosmonauts aboard the ISS have taken 19 different samples, on missions across the years between 2010 and 2016, by swabbing the outside surface of the ISS to see what collects there in orbit.

Among their findings are the DNA of otherwise very earthbound bacteria that closely matches the soil samples on Madagascar, and fragments of bacterial sea plankton at home in the Barents Sea between Russia and Norway. They’ve also found other bacteria samples, fungi spores and plant genome DNA.

The explanation for why there are traces of Madagascar at 400 kilometers above the earth is found in what scientists from TsNIImash Research Institute and Roscosmos, the Russian space agency, said is the “ionosphere lift phenomenon.” That lift can pull substances from the Earth’s surface into the upper atmospheric layer, anywhere from 60 kilometers to 1,000 kilometers high.

“In line with the discovery, Roscosmos scientists, jointly with other scientific groups, have prepared and substantiated a proposal to raise the upper border of the biosphere to 400 kilometers from the current altitude of 20 kilometers,” the Russian agency said in its press release.

The biosphere includes all layers where life on earth occurs, whether in the air, water or on land. Oddly, the Russian team wasn’t really looking for life on Earth: Their ISS surface tests were seeking evidence of extraterrestrial life, which could be blown on to the station with comet dust.