Home>African Future>Trump speaks of what's 'fair' on climate, never mentions Africa or LDCs
By AT editor - 2 June 2017 at 6:24 am 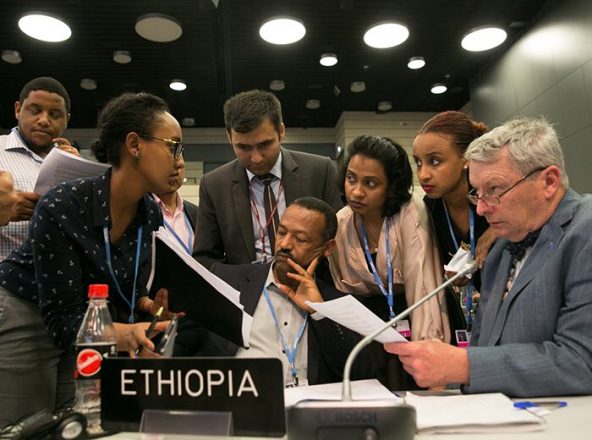 Much of the world waited Thursday to hear what United States President Donald Trump would say about the American commitment to the Paris Accord, not necessarily because the U.S. withdrawal from the agreement promised during his 2016 campaign would be a surprise.

Rather, they needed to hear how Trump articulated a stance so at odds with the rest of earth, and so calloused in its disregard for the cooperative work to mitigate the existential climate threat and preserve a shared planetary future.

There were no surprises. The Trump administration believes the agreement is unfair to the United States, compromises its sovereignty and represents a “self-inflicted major economic wound.” It represents a massive redistribution of United States wealth to other countries who will never pay a dime, he said, and is the reason why other countries are laughing at an America getting scammed.

“The Paris climate accord is simply the latest example of Washington entering into an agreement that disadvantages the United States,” Trump said from, ironically, a too-warm White House Rose Garden where reporters shed their jackets in the heat as the president spoke yet again of putting America first.

Trump railed against provisions for China that permit Beijing to continue carbon-intensive energy in the short term while America is forced to wean itself off of its decades of fossil fuels; he complained bitterly about the $1 billion the U.S. has already committed to the GCF, and India’s sweet deal for “billions and billions and billions” in foreign aid.

Trump used the words fair or unfair eight times. There was one word Trump never used in his speech, though, and that word was “Africa.”

At least directly, Trump never touched on what the U.S. Paris agreement withdrawal means to some of the world’s least developed countries (LDC), and 34 African nations account for the majority of the world’s 48 LDCs. There was no acknowledgement of his nation’s role as a top polluter for decades, when compared with vulnerable developing nations working toward reliable renewable energy – just the outrage that the Paris accord is unfair to Americans who won’t be told what to do by foreigners.

Trump was quick to cry foul over China. “They can do whatever they want for 13 years. Not us,” he said, while relying on data about American jobs, and reports on economic and industrial impacts, offered by anti-accord sources.

He spoke of how the U.S. will be “environmentally friendly” and continue to lead the world in clean air and water standards, while neglecting to mention at all that Americans are still responsible for the second-highest level of CO2 emissions on the planet, according to World Bank data.

That’s a level approaching 20 times that of the world’s LDC nations combined – nations that generate a fraction of the planet’s total CO2 emissions, and are least equipped to deal with the consequences of climate change that already are disproportionately affecting their lives and future.

“The LDC group stands firm on our commitment to the Paris Agreement and ambitious climate action,” said Gebru Jember Endalew of Ethiopia, chairman of the LDC group for the UN Framework Convention on Climate Change, on Thursday. “We urge all countries to do the same.”

No turning back on Africa’s future

A well-communicated moral argument for America’s responsibility to the global community was clear in the run-up to Paris in December 2015, and that’s clearly irrelevant to the short-sighted and isolationist Trump making a move that ultimately damages U.S. interests. Not so for his predecessor, and former U.S. President Barack Obama – along with countless U.S. and global leaders – quickly released a statement that made clear there will be no turning back.

“Simply put, the private sector already chose a low-carbon future,” said Obama, who championed U.S. engagement in the accord and the political will to back it at home. “And for the nations that committed themselves to that future, the Paris Agreement opened the floodgates for businesses, scientists, and engineers to unleash high-tech, low-carbon investment and innovation on an unprecedented scale.”

Those nations include Africa’s LDCs, who despite U.S. foreign aid cuts and the Trump shift on climate policy and climate finance, have demonstrated their commitment to meeting sustainability goals. The African Union (AU) position, historically, has made clear that “while Africa is not responsible for the pollution and the factors causing climate change,” the African leadership is “poised to cooperate fully” with global initiatives on climate. Yet the expectation has been that the developing world, through the South Korean-based Green Climate Fund and other investments, will support them in this critical work.

They likely will, Trump or not. Africans will find a ready partner in Germany, a top contributor to the Least Developed Countries Fund and a nation that, along with France and Italy, issued a joint statement Thursday affirming the Paris agreement. They’ll continue to see FDI from Beijing, which said it plans to honor its Paris obligations. Above all, Africans – and especially the LDCs – will benefit from African leadership and innovation that prioritizes the resources and future of Africans.