Home>News>Defiant Kabila interview: 'Congo this, Congo that' on election, human rights
By AT editor - 4 June 2017 at 4:01 pm 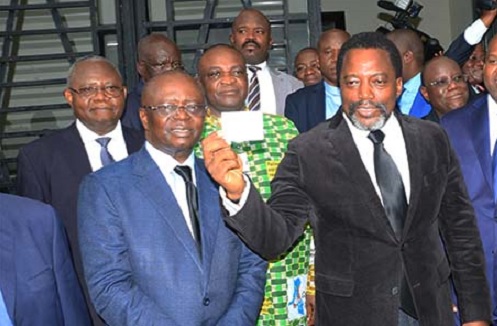 President Joseph Kabila of the Democratic Republic of Congo says he does not foresee holding the country’s stalled 2016 elections anytime soon, and has refused to rule out a third term for himself.

Kabila’s remarks were part of an interview with German media outlet Der Spiegel, in which the defiant president denied making any commitment to hold elections for which he said the nation is not ready. He also blurred the line between a constitution that prevents his third term and the changes that would in fact permit him to do so.

“I didn’t promise anything!” Kabila said during a probing interview on the postponed elections, which runs counter to statements made earlier this year that he will abide by a December 2016 agreement negotiated with the assistance of the National Episcopal Conference of Congo (CENCO).

Implementation of that agreement between Kabila’s administration and the Rassemblement opposition coalition, formerly led by the late Etienne Tshisekedi, was never publicly endorsed or advanced despite the urging of United Nations officials, and other Western governments and NGOs.

Kabila, in his interview, was dismissive and defiant about their role in DR Congo and a mutual lack of trust between them – including Germany, which currently supports the Congolese with €256 million in aid each year.

Kabila further waved off any threat arising from exiled opposition politician Moise Katumbi, who supports new sanctions against DR Congo officials – including Kabila’s media spokesman – and has appealed for protection to return home to his country.

“Now, the Congo is becoming a punching bag,” Kabila complained to Der Spiegel. “Congo this, Congo that, Congo and the human rights. But we don’t act on the basis of what the West thinks.”

To read the interview in full, see this link.