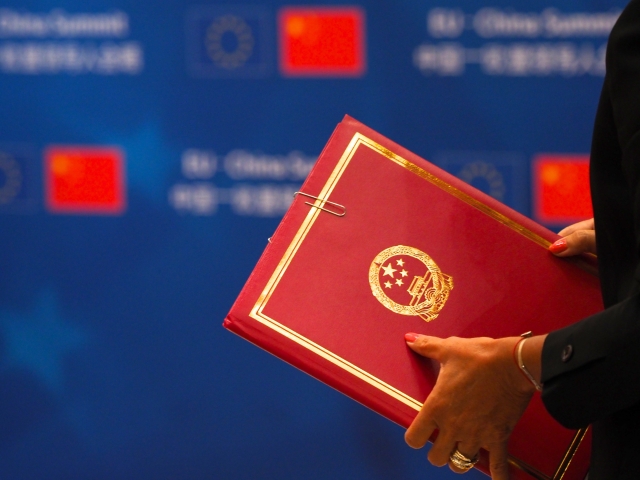 In the aftermath of President Donald Trump’s announcement Thursday that the United States was pulling out of the Paris climate accord, there was no shortage of responses from the international community or, for that matter, from American business leaders and local and state governments.

The rest of the world expressed solidarity on Paris, from African Union Commission head Moussa Faki Mahamat – who said in May that addressing climate change in Africa may be the key to lasting peace – to President Emmanuel Macron of France and philanthropist Michael Bloomberg in New York City.

The African Union and European Union issued a joint statement reaffirming their commitment on climate, noting that this year’s COP23 in Bonn will serve as an opportunity to stand “with those most vulnerable to climate change” and the hard work of building resilient societies across the planet.

Macron’s France, along with Germany and Italy, vowed that the Paris agreement “remains a cornerstone in the cooperation between our countries,” and in a joint statement reaffirmed their mutual resolve to meet climate finance and adaptation goals, particularly among the poorest and most vulnerable nations.

Following the EU-China summit in Brussels, EU President Donald Tusk spoke of a shared responsibility for the planet and solidarity with future generations, yet there was one statement that never saw the light of day. A planned joint statement of China and the European Union, floated earlier in the week, failed to meet approval Friday because of a longstanding conflict over China’s market economy status.

That’s despite the EU-China alignment on climate, one that increasingly has implications for Africans. Rather, China’s position was carefully, if not surgically, articulated during a Friday press briefing when a direct answer on a joint EU-China statement was sidestepped while emphasizing China’s climate resolve.

“Developing countries, least developed countries and small island states in particular, are vulnerable and not developed enough to deal with problems caused by climate change, and thus in need of assistance and aid by the international community,” said Foreign Ministry spokeswoman Hua Chunying.

Africa, China and Europe together

The abdication of America’s leadership role on climate is a move that follows fractures with Europe over NATO, trade and long-shared democratic values that have led German Chancellor Angela Merkel to say America can no longer be trusted, and others to suggest the shift as nothing less than seismic in terms of global history since World War II.

Journalists across the world appeared to anoint China as the de facto flagbearer of that new world order, poised to step into the vacuum left by the Trump administration on the momentum of Beijing’s Belt and Road plan, and Chinese foreign policy engagement and FDI purse. But what of the EU-China relationship, and the trilateral approach to Africa’s sustainable development?

The geopolitical narrative is usually framed – not entirely without cause, obviously – as an East v. West struggle for political influence, economic opportunity and access to resources. The United States recognizes positioning for opportunity too, although clearly without the sensitivity of Europe to the colonial history and legacy.

U.S. Secretary of State Rex Tillerson, in remarks made to State Department employees in early May, spoke of Africa’s economic and trade opportunities as “a potential sitting out there, waiting for us to capture it” in a way that European diplomats might well consider unseemly. The jarring turn of phrase “captures” entire centuries of the planet’s tragic history with Africa, yet the language of the oil executive turned Trump administration statesman reflects the “America First” mantra on foreign affairs.

It encapsulates precisely what led to the decision against the Paris Agreement on climate. Beijing, on the other hand, “continues to present itself as a fellow developing country and to emphasize the ideological South-South cooperation character of its relations with Africa,” according to a European Parliament analysis published in 2015. And that’s what the Chinese foreign ministry said on Friday, almost verbatim, although there are plenty of critiques on how China’s own African priorities might be viewed as predatory rather than win-win.

Meanwhile, Europe’s self-interest on migration has created a new wariness among some African leaders, and there are already power struggles over sustainable development initiatives such as the African Renewable Energy Initiative. Yet both China and the EU – speaking broadly of member states – are poised to assist Africa in achieving critical climate goals, and work past their differences on key issues of trade and human rights.

Some African leaders readily see possibilities for China, the EU, the AU and their respective nations to move forward on climate, with Africans leading the way. Kaddu Sebunya, president of the African Wildlife Foundation and a Uganda native, penned a weekend editorial for The Standard in Kenya quickly carried by Xinhua as well.

“Trump’s about turn on the Paris accord should serve as a wake-up call for Africans to start taking climate change into their own hands,” Sebunya said. “If those that pollute the world’s environment are not willing to step up and clean it, we Africans must roll up sleeves and do it ourselves.”

Thankfully, he adds, Africa is not alone: “China, the world’s biggest polluter, says it is committed to the Paris accord. Similarly, the European Union has said it ‘will defend the clean energy transition.’”

Trump may have isolated America’s government, though not necessarily the nation’s citizens, cities and companies, but Sebunya rightly sees that ill-advised decision as an opportunity for Africa to work together with Europe and China. In the global fight against climate change, there’s no longer time to waste on an outdated narrative of East v. West competition over Africa’s climate and resources, or Africa’s future.