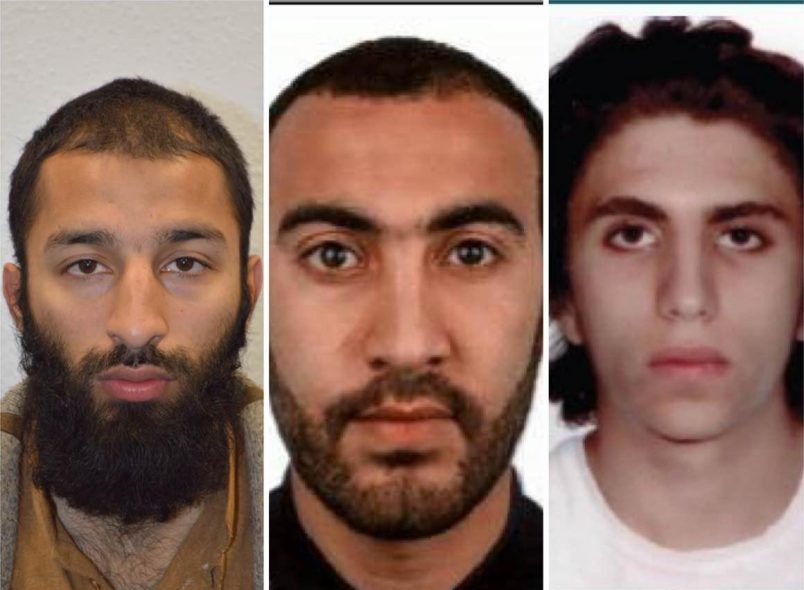 Authorities in London have released the names of the three people they say attacked pedestrians on the London Bridge and then stabbed people out for the night in the nearby Borough Market neighborhood.

The men have been identified as Khuram Shazad Butt, 27, a British citizen of Pakistani origin, and Rachid Redouane, 30, who has claimed to be both Moroccan and Libyan. The Metropolitan Police say he also used the name Rachid Elkhdar, with a different date of birth.

The identity of the third suspect released Tuesday is Youseff Zaghba, 22, an Italian citizen of Moroccan descent.

Butt was known to the police and MI5 counterterrorism experts, but there was no intelligence to suggest that this attack was being planned. Redouane was not known to British authorities, nor was Zaghba although some sources say he was on a watch list in Italy.

“Work is ongoing to understand more about them, their connections and whether they were assisted or supported by anyone else,” said Assistant Commissioner Mark Rowley on Sunday. Police arrested 12 people – seven women and five men – and searched at least seven properties. All 12 were subsequently released without charge, although police said they arrested a 13th person on Tuesday who remains in custody.

A total of seven people died in the attacks, including citizens of France and Canada, and 48 people were taken to the hospital. Three dozen of them remained in hospital, including 18 in critical condition, the updated police report said.

Police say a white Renault van rented by the attackers mounted the pavement just before 10 p.m. and began mowing down London Bridge pedestrians before it was abandoned. The three attackers left the van and continued brutal knife attacks in the pubs and streets of the busy Saturday-night neighborhood.

All three attackers wearing what turned out to be fake suicide vests where shot dead by police, who ended the incident eight minutes after it began.

British authorities say they are continuing to notify families about the victims, but said there are delays because some of the victims are from abroad. A specialist officer also is assisting the loved ones of one person who remains missing.