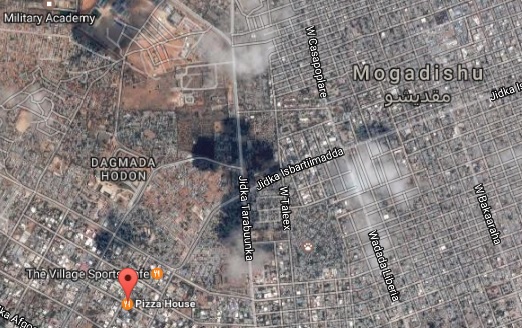 A bold attack on a restaurant in the Somali capital of Mogadishu on Wednesday continued late into the night, as armed men held an unknown number of hostages inside.

An updated story from the Associated Press said that at least 31 people had died in a violent and confusing attack that began with a car bomb explosion and continued inside the restaurant. Local authorities told Reuters that at one point, at least 20 people were held as hostages inside the Pizza House. Another 40 people were injured in a siege that continued until dawn.

The al-Shabaab militant group claimed responsibility for the attack, but there was no immediate confirmation that was the case as confusion continued about the precise location.

The incident is the latest in a spate of attacks initiated by al-Shabaab since Farmajo was elected in February, and Somalia’s new government was met with renewed threats and violence.

In mid-April, Farmajo invited al-Shabaab to dialogue with the new administration and gave the fighters 60 days to end the violence within an amnesty period. That time has expired, with Farmajo’s promise to eradicate al-Shabaab a priority for both Somali military forces and United States military personnel who are supporting them, as was the case with an airstrike Sunday at a militant base in Middle Juba.

American officials confirmed that U.S. forces, acting with the Government of Somalia, conducted the airstrike in alignment with new and broader authorities approved by President Donald Trump in March.

The United Nations Security Council on Wednesday extended the mandate of the United Nations Assistance Mission in Somalia (UNSOM) until March 2018. The full text of the 2017 resolution strongly condemns al-Shabaab attacks while reiterating the international determination to reduce their threat to Somalia.