Home>News>Western diplomats urge transparency as Kenya election prep moves ahead
By AT editor - 15 June 2017 at 6:48 pm 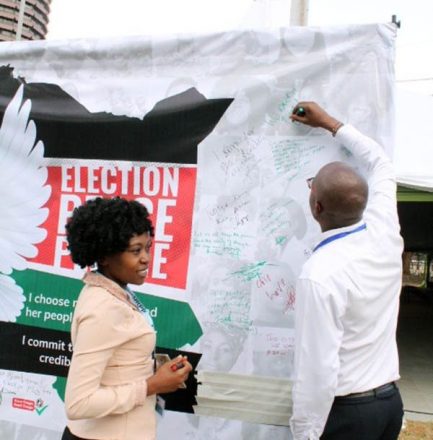 Western diplomats in Kenya issued a joint statement on Thursday urging the nation’s leaders to move forward in this year’s election process in a fair and transparent manner.

The statement followed a three-day National Election Conference this week in Nairobi, geared toward ensuring a peaceful election process on August 8.

The European Union ambassador to Kenya, joined by the High Commissioner for the United Kingdom and the Heads of Mission for six other nations, praised the Independent Electoral and Boundaries Commission (IEBC) and the discussion of preparations for what remains a contentious election process.

President Uhuru Kenyatta cited “unavoidable circumstances” that prevented him from attending the conference and signing the pledge to commit to peaceful elections. He was scheduled to make opening remarks alongside Nasa opposition party candidate Raila Odinga, according to The Standard; instead, he vowed to sign the pledge upon his return to Nairobi and at his earliest convenience.

Kenyatta and Odinga have continued to clash over the election process, including an ongoing challenge over a contract to provide ballots that was awarded to a firm said to support Kenyatta’s Jubilee Party, and the selection of the KPMG firm to complete a voter registration audit for IEBC.

The audit results, released last week, showed discrepancies involving some 2.9 million voters, including thousands of registrations among the deceased. The IEBC released a statement following a meeting with election stakeholders on Thursday and said it plans “to complete the clean-up of the register” by Friday.