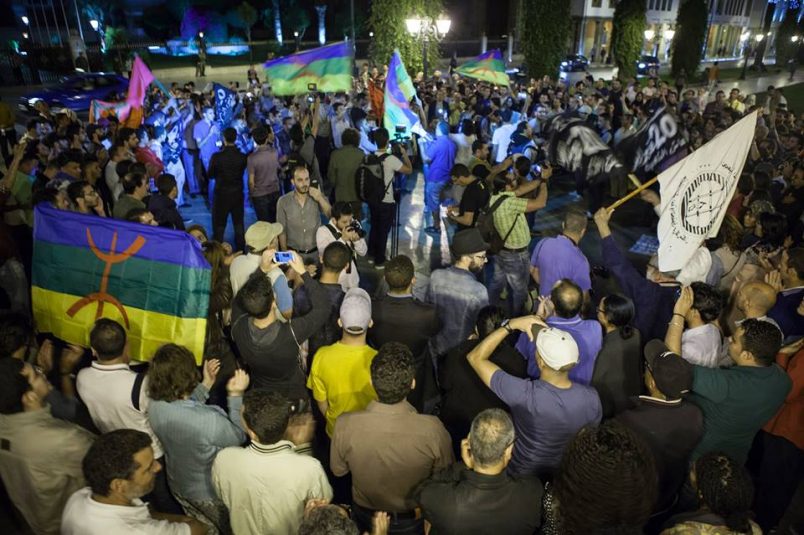 At least 127 people have been arrested in the ongoing “hirak” protests in Al Hoceima and the wider Rif region of Morocco, including prominent activist Nasser Zafzafi who was arrested on May 29.

Zafzafi was severely beaten by police following his arrest, according to an account released jointly by Human Rights Watch and Amnesty International on Thursday. He requested a medical exam during a court appearance on June 5, but one of his attorneys says that he still has not received one. Zafzafi’s account was corroborated during a June 12 interview with Fahim Ghattas, who was arrested with him.

“Moroccan authorities should investigate the credible allegations of police violence against Zafzafi and refrain from filing any charges that stem from peaceful speech or protest,” said Sarah Leah Whitson, Middle East and North Africa director of Human Rights Watch. “At this stage, the case looks like it’s more about throwing the book at a protest leader than punishing criminal behavior.”

Zafzafi remains held in pretrial detention, and faces serious charges including plotting against Morocco state security and violence against security forces. His arrest has mobilized activists whose protests continued this week in Casablanca, and whose numbers have grown across the country beyond Rif and beyond Morocco’s own borders.

Existing tensions escalated following the death of Mohcen Fikri on October 28, when he was crushed in a trash truck while trying to retrieve fish sold at market that authorities took from him and threw away.

Since Zafzafi disrupted services at an Al Hoceima mosque in late May, sparking the street protests, at least 83 people have been prosecuted in the city, the joint statement said. More than 30 of them have been sentenced for between 2 to 18 months in prison, while another group awaits trial in Casablanca.

Activists are planning new protests this weekend in solidarity with the detainees, to coincide with Eid al Fitr celebrations marking the end of Ramadan.