Home>African Future>In Uganda, Guterres calls on South Sudan's leaders to end war
By AT editor - 23 June 2017 at 7:28 am 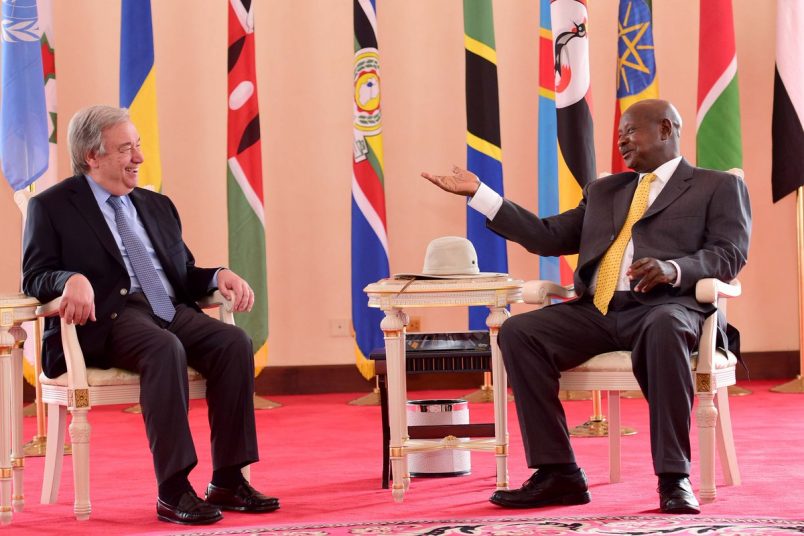 United Nations Secretary-General António Guterres completes his “Solidarity Summit” visit to Uganda on Friday, in an effort to raise the visibility of refugees and increase support for them and their host communities.

Hosted by Guterres and Ugandan President Yoweri Museveni, the summit of delegates, donors and heads of state hopes to make a successful appeal for USD$2 billion for programs and assistance.

Uganda is widely praised for welcoming some 2,000 refugees per day, according to the UN. In the past year, the country’s refugee population has more than doubled to some 1.25 million people.

Guterres visited the Imvepi camp in northern Uganda, home to about 120,000 people – the majority of them women and children – fleeing the violence of South Sudan.

South Sudan’s leaders “do not deserve the people of their country,” said Guterres, the former UN High Commissioner for Refugees, referring to the suffering that the war they have orchestrated has inflicted on millions of their citizens.

“It is time for the war to end. It is time for all the leaders of South Sudan to understand that they need to stop this war,” he added, thanking a host of regional and international bodies working to that end.

They included the regional Intergovernmental Authority on Development (IGAD), the African Union and individual heads of state, as well as the UN.

In addition to the South Sudanese, Uganda has welcomed refugees from Sudan, Rwanda, Burundi, the Democratic Republic of the Congo and Somalia.