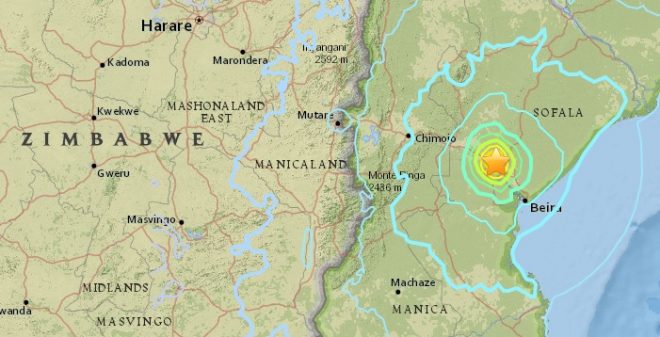 A 5.8-magnitude centered in Mozambique was felt across the immediate region, with quite a few reports of people who experienced intense shaking in and near the coastal city of Beira.

The shallow earthquake occurred at about 4:40 a.m. about 35 kilometers to the northwest of Dondo in Sofala province, according to the United States Geological Survey (USGS). There were no immediate reports of injuries or significant damage.

About 40 people reported feeling the earthquake to USGS, about half of them from Beira but some from as far off as Harare, Zimbabwe. Reports from other communities in the two neighboring countries included Chimoio, Chimanimani, Manica and Mutare, and Epworth.

“This earthquake had intensity to move my bed,” wrote one, describing cups that fell off the table and a bit of panic in their building because of the hard shaking.

Another person said they were sleeping when suddenly they heard a very loud noise that seemed to be breaking the windows. The noise came with hard and rapid side-to-side shaking before it was over.

While the moderate earthquake did not appear to cause any significant impacts, authorities sent teams to the region to assess any damage or community needs.