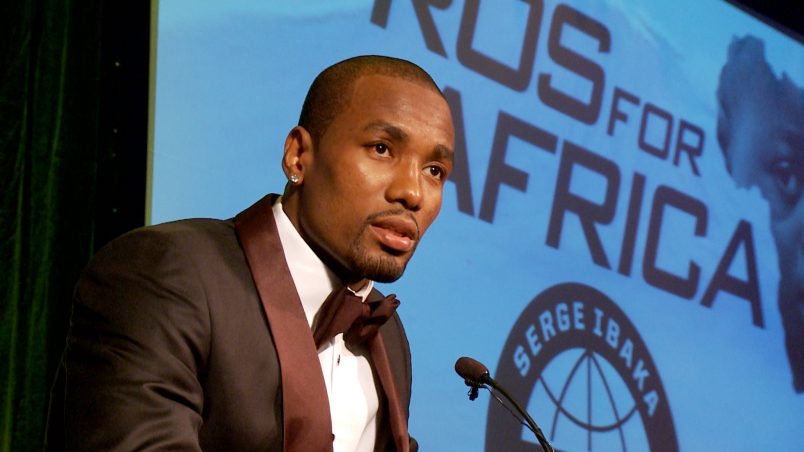 The big news about NBA star Serge Ibaka on Sunday was that he had signed a USD$65 million, three-year contract to continue playing basketball for the Toronto Raptors, resolving all speculations about Ibaka’s free agency.

What Ibaka said on Saturday, though, piqued almost as much interest. After suspicions about his real age popped up again during an American sports radio podcast, the African star issued a statement targeting ugly stereotypes that still prevail in the West and his disappointment with them.

“We’re not practicing NBA birtherism here,” the hosts of “The Full 48” with ESPN’s Zach Lowe as guest said. “But, we are … that is the scuttlebutt.” The podcast discussion about Ibaka’s real age, and the rumors among NBA teams that he is older than his listed 27 years, was part of a wider program about the NBA’s free agency.

Ibaka, who was born in Congo’s Brazzaville, issued a statement that tied the rumors to persistent misunderstandings about Africans. He explained that his city is home to more than 1 million people.

“A city with hospitals, a civil registry and an administration. I was born in a caring, loving and united family,” Ibaka wrote in his social media statement. “I was not born in the jungle.”

Ibaka called on the media to “take their responsibility seriously when talking about important matters that can hurt people.” He said it was disappointing to see news based on stereotypes without proof.

Ibaka, believed to be the first ever drafted from Congo Brazzaville, has played for several NBA teams including the Raptors. He was appointed in April to the board of the NBA player’s charitable arm, and his own foundation serves children in Brazzaville.

The comments about Ibaka that sparked his response begin at the 50:30 minute mark on the podcast.