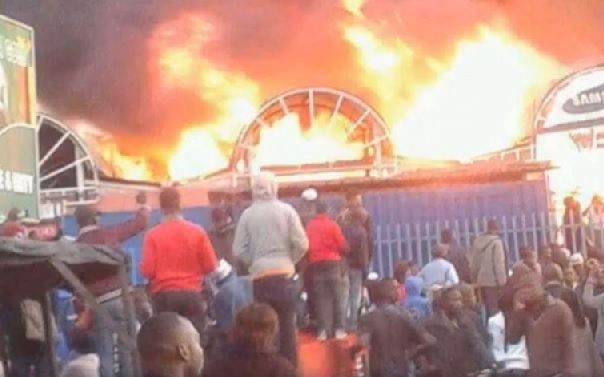 The Lusaka City Market was heavily damaged by fire Tuesday, amid recent warnings from the head of Zambia’s police service that saboteurs are targeting government buildings, utilities and other public spaces.

President Edgar Lungu was quick to appeal for calm in Zambia’s politically charged environment, and urged Lusaka residents to wait for the results of an investigation into how the fire started, but both a top Lungu aide and Inspector General Kakoma Kanganja said sabotage was suspected in the massive blaze.

The fire broke out early Tuesday morning, causing catastrophe for both businesses and customers who rely on goods sold at the sprawling economic hub on the city’s southwest side. A Zambia Police statement said the fire broke out in the ‘dark yellow’ zone on the market’s south side, in a booth where mobile phones are sold. The police said they responded earlier to a similar fire just after midnight at a Misisi charcoal market.

“As police we have instituted investigations in both cases and at the moment we are not ruling out any possibilities,” the statement said.

Speaking with the Lusaka Times, regional provincial minister Japhen Mwakalombe described the city market fire as “barbaric,” and joined with those calling for justice, despite conflicting reports that suggested the fire may be caused by an electrical problem rather than intentionally set. Firefighters posted images of the Zambian Air Force racing to the scene with water because of a lack of fire hydrants at the market that hampered firefighting efforts.

As rumors and accusations began to fly, both the ruling Patriotic Front (PF) party and the main opposition United Party for National Development (UPND) party issued statements in response to the fire.

“All Lusaka residents hold Lusaka City Market dear to their hearts because it’s a source of livelihoods to thousands of our mothers and youths,” the UPND said in a statement issued by Chairman Mutale Nulumango. “It’s a complex that cuts across political, religious or ethnic divides and brings World class goods and services from far flung places such as Dubai, China and Europe, right at our doorsteps.”

The UPND added that “those that find comfort in politicizing such tragedies” should step back and let investigators do their jobs.

For their part, the PF warned against “any unnecessary provocation from those whose mockery seeks to dilute the impact of this unfortunate event” in a statement from PF secretary general Davis Mwila.

“As the PF, we will not be distracted from our vision of meaningful development for all Zambians by a few sadistic elements that have nothing but terror and division to offer to a peace loving and united Zambia,” the PF warned.

There were not yet confirmed injuries or fatalities caused by the fire.