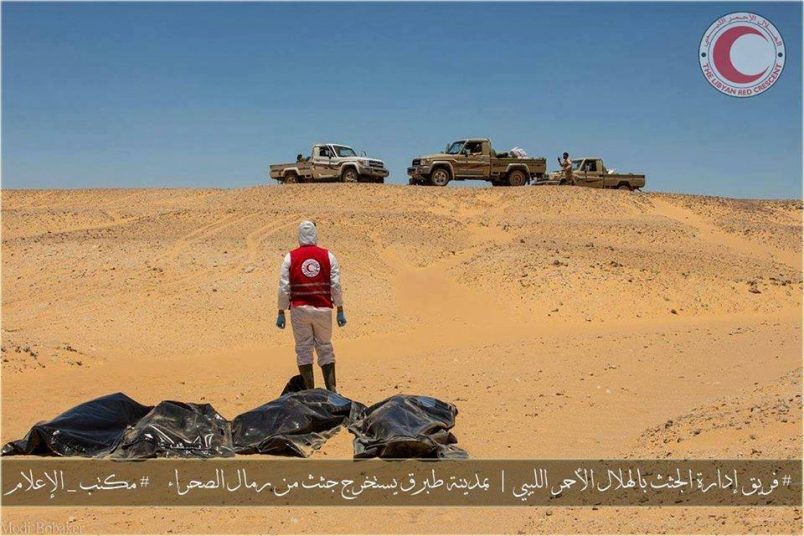 At least 48 Egyptians have died in the desert in Libya, all believed to be part of a group of migrant workers in which there were no survivors.

The Libyan Red Crescent said the bodies were found between Tobruk, near the Egyptian border in Libya’s east, and Ajdabiya. It appeared the group was traveling through the desert to avoid a security checkpoint on what is the only main road connecting the two cities.

The Red Crescent workers said they had recovered 19 of the bodies, but not the other 29, as they required a number of vehicles to retrieve all of them. The bodies were badly decomposed in the heat, and authorities said they did not yet know how long they had been there. A recent heat wave in the Mediterranean region increased the dangerously high temperatures migrants already face there.

Identification carried by the dead migrants identified them as Egyptian nationals. Ahmed Abu Zeid, a spokesman for the Egyptian Foreign Ministry, said that the embassy in Tripoli had been notified of the deaths, according to Al Ahram. Arrangements were being made to bring the remains back to Egypt.

Authorities said they suspect that the migrant workers were in the hands of human traffickers as they sought to make illegal entry into or across Libya. The identities of seven of the Egyptian migrants were publicly released on Saturday, but the names of other victims have not yet been made public.