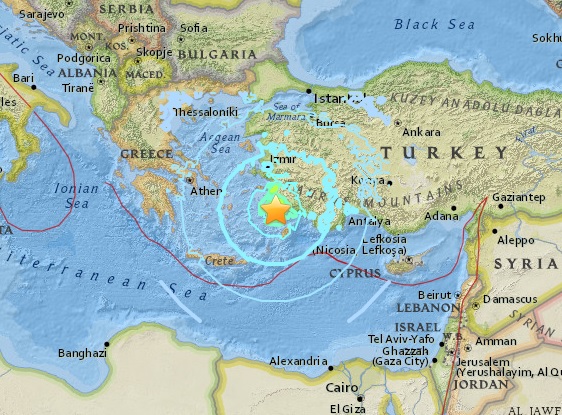 A major earthquake that sparked a small Mediterranean Sea tsunami struck Turkey and Greece early Friday morning, with reports that the temblor was felt as far away as Egypt.

The 6.7-magnitude earthquake hit at about 1:30 a.m. local time, 10 kilometers from the seaside town of Bodrum, according to the United States Geological Survey. The shallow quake forced water into the twin bays of the resort town, causing a tsunami that inundated hotel entrances. Frightened tourists poured into streets where sea water surged 50 meters, according to Turkish broadcaster NTV.

At least two people were reported dead on the Greek island of Kos, where the Dodecanese islands hug the coast of Turkey. Some 500 people were injured, The Guardian reported, with damage in both countries.

“I woke up while sleeping, everybody went crazy,” said one person in Bodrum, reporting the experience to the European Mediterranean Seismological Centre. “Sounded like a plane landing outside my house,” said another, adding household items had fallen and broken on the floor and the electricity was out.

People from as far away as Giza, the historic city near Cairo, reported feeling the earth shake. Reports also came from Macedonia, Montenegro and across the Balkans.

Aftershocks continued to shake both Turkey and Greece into the early morning hours, with news outlets sharing footage of people running in the dark alongside cars fleeing the coast. Nearly 80 aftershocks had been recorded by 6:30 a.m., at least 18 of which were at a magnitude 4.0 or greater.

The 2015 Ocean Science Study from the European Geosciences Union found that 10 percent of all tsunamis occur in the Mediterranean Sea, with one large tsunami, on average, occurring each century. A 7.0-magnitude earthquake hit the Messina region in Italy in 1908, causing a tsunami that killed thousands, with observed waves locally exceeding 10 meters in height.