Home>News>Angola presidential candidates begin campaign ahead of August election
By AT editor - 24 July 2017 at 9:13 am 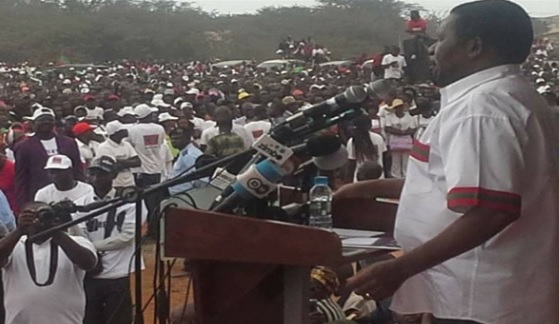 Electoral campaigns began over the weekend in Angola, with just a month to go before voters head to the polls on August 23.

The official campaigns began quietly with André da Silva Neto, head of the National Electoral Commission, calling for tolerance and respect for order, according to the state-affiliated ANGOP news agency.

The 2017 elections move forward without the ailing President Eduardo Jose dos Santos, who announced earlier this year he would not be seeking re-election. He has been the president of Angola since 1979. The longtime ruling party Popular Movement for the Liberation of Angola (MPLA) was quick to rally and began door-to-door campaigning for presidential candidate João Lourenço in Luanda on Saturday.

Lourenço, the nation’s defense minister and MPLA vice president, has promised to curb corruption in a country where it is endemic. He was chosen by dos Santos last winter instead of the current vice president of Angola, Manuel Vicente, who faces charges of money laundering and corruption after a Portuguese judge last month ordered that he stand trial.

Other candidates include Isaías Henrique Ngola Samakuva, head of the main opposition UNITA party kicking off in Cacuaco, and Abel Epalanga Chivukuvuku of CASA-CE, who began his campaign in Lubango.

Angolan officials declined to sign an MOU with European Union election observers, while noting that its only obligations are to the African Union and Southern African Development Community. “The European Union is invited, like other organizations, to observe the Angolan elections,” said Georges Chicoti, the minister of foreign affairs, last week.