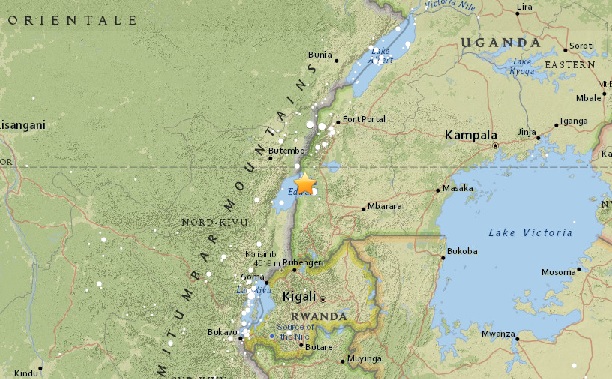 There were no reports of serious damage or injuries following the moderate earthquake that hit southwestern Uganda on Sunday morning, but the quake disrupted prayer services at nearby churches and was felt in neighboring Rwanda and Democratic Republic of Congo.

The 5.3-magnitude quake came just after 10 a.m. with an epicenter beneath Lake Edward, some 39 kilometers west of Rubirizi. The United States Geological Survey (USGS) put the depth at a shallow 10 kilometers, as did the European Mediterranean Seismological Center (EMSC).

Ugandan media said the quake frightened churchgoers in the Rubirizi District, where services were interrupted. Mild shaking was reported in other Ugandan cities including Entebbe and Kampala, with most people saying that the capital’s buildings shook for about 20 to 30 seconds without any damage.

One person on the third floor of a building in the Ntinda neighborhood in Kampala’s northeast said it was scary as the quake shook a few things from a bedside table to the floor before it was over.

At Butembo in eastern Democratic Republic of Congo, the quake was described as a bang followed by rumbling, while people in Kigali said shaking was “felt clearly” as well.

“This earthquake shook for a few seconds,” said one person whose office windows rattled in the Kacyiru neighborhood in Kigali, and reported it to the EMSC. “After saw cracks on the wall,” they said, noting that it was the second such episode since last month.

Others in Kigali said it was strong enough to wake them up but “nowhere near doing any damage to property.”