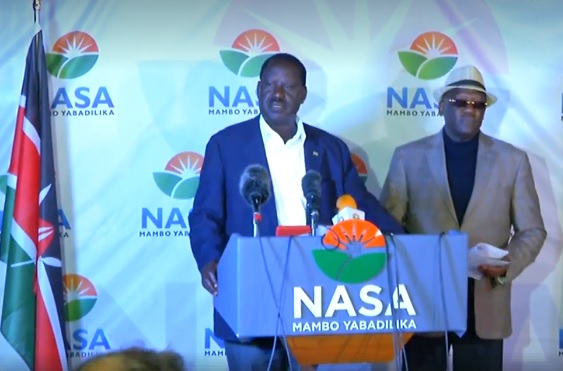 Election results coming in from Kenya’s Independent and Electoral Boundaries Commission (IEBC) showed President Uhuru Kenyatta ahead in the tally with 54.6 percent of the vote compared with main challenger Ralia Odinga’s 44.5 percent. Those figures were reported early Wednesday with just under 90 percent of the vote counted.

Kenyatta voiced his confidence in a victory while casting his own vote Tuesday in his home district of Kiambu County, while again urging Kenyans to participate in the vote and then return peacefully home. He told reporters that he felt good and that was because his Jubilee Party ran a positive campaign.

By Wednesday, however, Odinga’s campaign, had filed a statement declaring the results illegal. The Nasa opposition coalition candidate and his party called the result reporting process a sham, and held a 1 a.m. press conference to condemn election results he says aren’t supported by any documentation.

Odinga claimed that he was actually winning and that the process was being manipulated, with access to accurate tallies denied to his opposition party. He said he would not be speaking if he was not confident that the results were “fictitious” and “fake,” and that the IEBC was streaming data that was not verified.

“I fear that this is precisely the reason why Mr. Chris Msando was assassinated, so that this would happen,” said Odinga. He also said the alleged regularities were “exactly a replica of what happened in 2013.” Kenyatta defeated Odinga in that election.

Both candidates, along with international leaders, have appealed for calm during Kenya’s election. Previously, however, Kenyatta has blamed Odinga for the post-election violence in 2007 and 2008 that claimed more than 1,000 lives. It also displaced more than a half million people and resulted in an International Criminal Court (ICC) investigation.