Home>Articles>Nasa's Odinga demands IEBC declare him winner of Kenya's election
By AT editor - 10 August 2017 at 4:42 pm 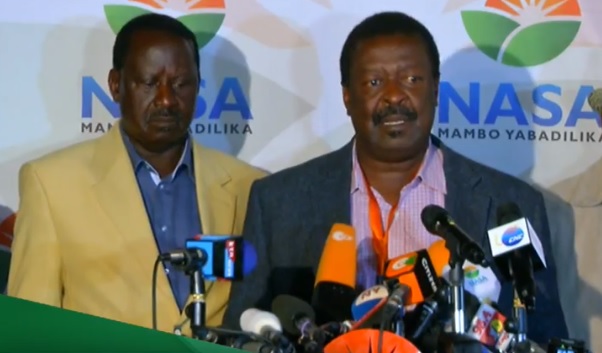 Odinga, speaking at a news conference on behalf of his Nasa coalition, said real results show him with more than 8 million votes and defeating incumbent President Uhuru Kenyatta, who received just over 7.5 million votes.

“We have now received further information from confidential IEBC sources furnishing us with the actual presidential election results,” Odinga said. He promised to release the documents he said were obtained from the Independent and Electoral Boundaries Commission (IEBC) servers and differ from reported counts.

The disupted IEBC numbers show Kenyatta with 54.2 percent of the votes, at more than 8.1 million, compared with Odinga’s 44.9 percent coming in at 6.7 million. That’s with 98.5 of the votes tallied, the IEBC says. They have not announced the final results.

“Based on the foregoing we demand that the IEBC chairperson announce the presidential election results forthwith” and declare Odinga and his running mate the duly elected winners, he said.

Odinga filed a statement immediately after Tuesday’s voting that declared then-reported results illegal. Odinga claimed that he was actually winning and that the process was being manipulated, calling the results “fictitious” and “fake,” and accusing the IEBC of streaming data that was not verified.

“I fear that this is precisely the reason why Mr. Chris Msando was assassinated, so that this would happen,” said Odinga. He also said the alleged regularities were “exactly a replica of what happened in 2013.” Kenyatta defeated Odinga in that election.

Isolated episodes of electoral violence have come in the wake of the voting, including three deaths on Wednesday. Both candidates, along with international leaders, have appealed for calm during Kenya’s election. Previously, however, Kenyatta has blamed Odinga for the post-election violence in 2007 and 2008 that claimed more than 1,000 lives. It also displaced more than a half million people and resulted in an International Criminal Court (ICC) investigation.