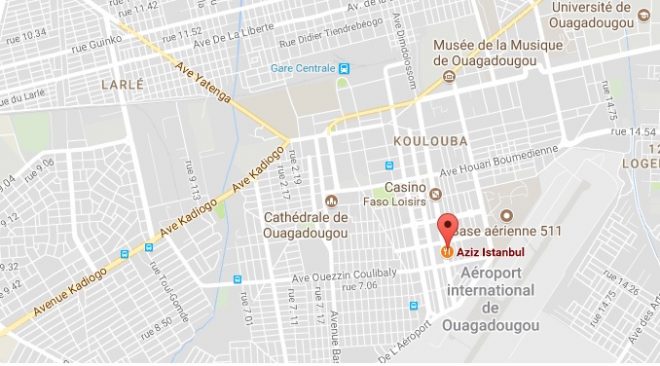 At least 18 people are dead and others wounded in an attack in the Burkina Faso capital of Ouagadougou, according to multiple media reports early Monday.

Government officials told AFP that the victims of the center city attack represent a range of nationalities, but they have yet to be identified. A number of people were trapped on two floors above a street-level Turkish restaurant, Le Monde reports. Many of them were freed as security forces killed two suspected attackers.

Witnesses said that three suspected jihadists pulled up in an SUV and opened fire on Avenue Kwame Nkrumah, targeting customers at the Aziz Istanbul restaurant and nearby hotel at about 9:30 p.m. Sunday night. People began running from the restaurant, which is located just to the north of the city’s airport, as police and emergency personnel arrived along with city officials who converged on the scene.

Heavy gunfire was heard for hours in the city’s center, with sporadic shooting still heard at 2 a.m. local time.

“We are following reports of gunshots in downtown Ouagadougou,” the United States embassy said in a Twitter message. “We urge U.S. citizens to shelter in place and avoid the area.”

French authorities also issued a statement asking its citizens to avoid the area. “France extends its condolences to the families of the victims,” the government added. “It stands by the people and authorities of Burkina Faso in this painful moment and stands ready to assist them.”

Authorities have not yet identified any affiliation of the armed attackers, nor has any group claimed responsibility. A previous attack at the Hotel Splendid in January 2016, not far from the current scene, was carried out by Al-Qaeda in the Islamic Maghreb (AQIM).

More than two dozen people were killed in the attack, one of several that have occurred in recent years in a Sahel region increasingly challenged by jihadist violence.