Home>News>Denied access to Mauritania, U.S. anti-slavery activists press on
By AT editor - 13 September 2017 at 10:02 pm 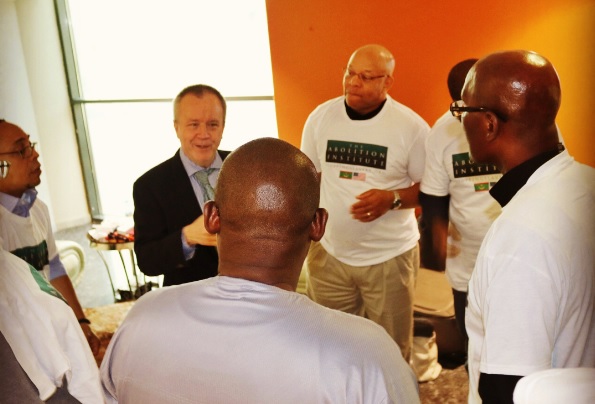 Mauritania has denied access to a group of American anti-slavery activists on a mission to West African nations, on grounds that their plans conflicted with Mauritanian law and had not been approved through proper channels. That group has nonetheless continued on their mission in Dakar, Senegal.

“We are engaged in this work to show solidarity and support for those working against slavery and its legacy – and to strengthen partnerships,” said Jonathan Jackson, the national spokesman for the Rainbow PUSH Coalition. “Collaboration is key to addressing these issues and we came to Mauritania in this spirit.  It is unfortunate that the Mauritanian government dismissed this opportunity, but it will not stop us from continuing our ongoing work to eradicate global slavery.”

The group also includes Mauritanian native Bakary Tandia and Sean Tenner, co-founders of the Abolition Institute in Chicago, and artists including Shiwali Varshney and Che “Rhymefest” Smith. The group had planned a week-long tour of Mauritania and, according to Tenner, were “surprised and disappointed that the Mauritanian government blocked this attempt at constructive dialogue at the last minute.”

American labor leaders warned last month that conditions in Mauritania should disqualify the nation from participating in African Growth and Opportunity Act (Agoa) trade benefits for which it is currently eligible. Activists say Mauritania has seen renewed arrests of anti-slavery activists, in a nation where tougher anti-slavery measures were enacted in 2015 but the rate continues to be one of the highest in the world, according to the Global Slavery Index.