Home>News>UNGA: Beyond North Korea, Trump speech put rare focus on Africa
By AT editor - 20 September 2017 at 7:11 am 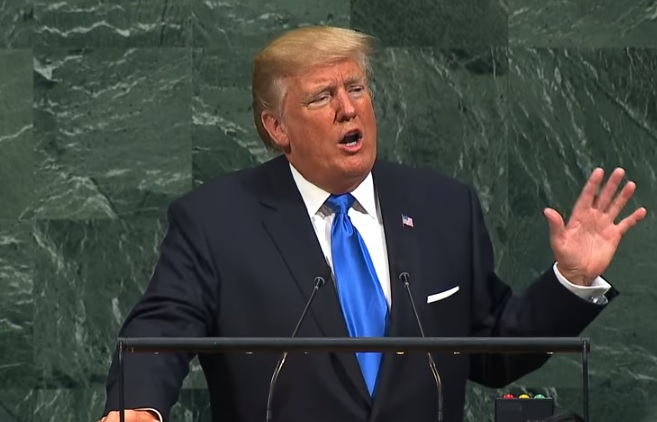 The United Nations General Assembly speech delivered by President Donald Trump of the United States raised quite a few eyebrows Tuesday over capricious and aggressive remarks on North Korea, and his blunt talk on how “major portions of the world are in conflict, and some, in fact, are going to hell.”

Trump’s “Rocket Man” reference to Kim Jong Un sparked a storm of coverage, but his pointed remarks about nations friendly to North Korea were less noted.

“It is an outrage that some nations would not only trade with such a regime, but would arm, supply, and financially support a country that imperils the world with nuclear conflict,” Trump said without naming them. He also called on the global community “to expose and hold responsible” countries that finance and support terror groups including Islamic State.

What also got missed in Trump’s speech was a brief but overt emphasis on Africa, which is a departure from a U.S. president who rarely speaks directly about the continent and, from political appointments to funding to foreign policy decisions, hasn’t appeared to make African issues a priority in his administration.

Yet in New York City, Trump followed his remarks on migration with a short list of U.S. commitments to African countries. “I want to salute the work of the United Nations in seeking to address the problems that cause people to flee from their home. The United Nations and African Union led peacekeeping missions to have invaluable contributions in stabilizing conflicts in Africa,” Trump said. He added that the U.S. continues to lead the world in humanitarian assistance, including famine prevention and relief, in South Sudan, Somalia, and northern Nigeria.

“We have invested in better health and opportunity all over the world through programs like PEPFAR, which funds AIDS relief, the President’s Malaria Initiative, the Global Health Security Agenda, the Global Fund to End Modern Slavery, and the Women Entrepreneur’s Finance Initiative, part of our commitment to empowering women all across the globe,” he continued.

To view the U.S. president’s complete remarks, see this link.