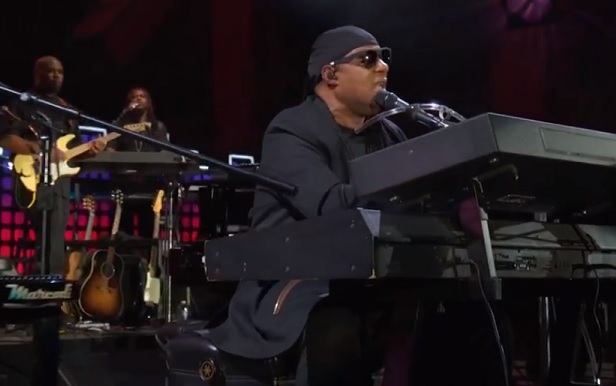 The concert, planned to coincide each year with the United Nations General Assembly, is the final celebration of Global Citizen Week. It capped activism and outreach efforts around the “For Freedom, for Justice, for All” theme, with thousands of people reaching out to politicians and other decision-makers, on issues such as protecting U.S. foreign aid commitments, and HIV prevention and treatment.

The festival drew 60,000 people to a street party with a purpose in Central Park. Wonder, the apartheid-era activist whose music was once banned from South African airwaves, touched on themes of racial justice from the stage. His remarks were interspersed between fan-favorite songs like “Higher Ground” and “Living for the City.” As Wonder played the 1980s-era “We Are the World,” the energized crowd sang along.

Global leaders greeted the crowd via video, including Michelle Obama, who delivered a message in support of women and girls. President Emmanuel Macron of France promised to raise USD$1 billion to support education in the developing world, part of the $3.1 billion funding goal for the Global Partnership for Education. Senegal is working closely with Macron on the education initiative.

“Together with President Macky Sall, we decided, beginning of 2018, to launch a call for education,” Macron said in his video message. “It’s all about education in poor countries, in developing countries.” Access to education is the key, Macron said, to elevating the lives and contributions of women, and ending terrorism and fundamentalism.

For more info on Global Citizen Festival, see this link.