Home>African Future>SA: New CNG-fueled buses hit the streets in Tshwane
By AT editor - 4 October 2017 at 5:14 am 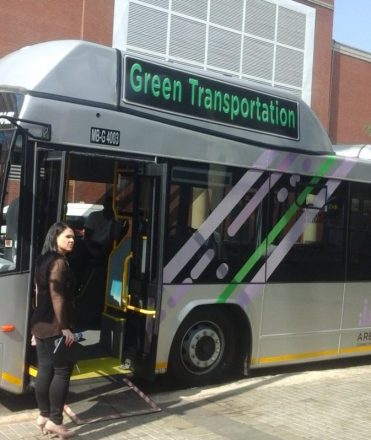 In South Africa, the City of Tshwane says it’s the first in sub-Saharan Africa to operate city buses that run on compressed natural gas (CNG) as it looks toward a more efficient, user-friendly public transport system.

The announcement came during this week’s dedication of a new bus terminal at Belle Ombre that will house 114 buses, 40 of which will run on CNG. The new facility includes a CNG refueling station as well as pumps for diesel.

The buses are “a progressive move towards promoting and achieving a fuel switch within the city-owned fleet and will ensure that the city makes a concerted effort to minimize its own carbon footprint,” the Tshwane officials said in a release. Those on hand for the dedication included Mayor Solly Msimanga, along with regional ministers of transportation.

“This investment also acts as a stimulant for the market so that there is wide uptake of the available technologies,” the Tshwane statement added. “The city continues to reaffirm its position as a leader in green technology and other green interventions.”