Home>News>New protests in tense Kenya as country moves toward elections
By AT editor - 6 October 2017 at 3:23 pm 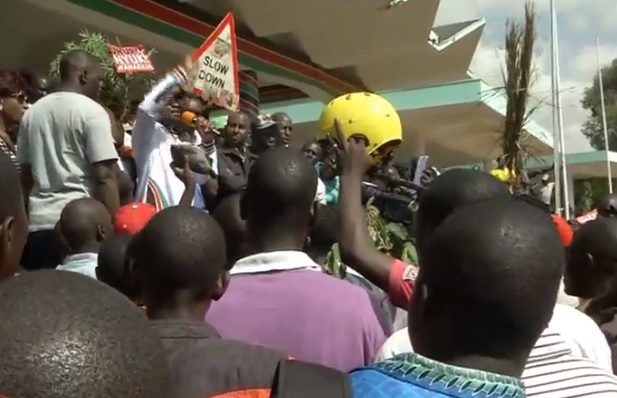 In Kenya, street protests ahead of the new presidential elections on October 26 turned violent Friday in Kisumu, one of many locations where authorities have used tear gas while dispersing crowds.

Supporters of candidate Raila Odinga and the Nasa political opposition party, protesting to demand reforms from the country’s Independent Electoral and Boundaries Commission (IEBC), blocked highways and burned tires in the coastal city along the Lake Victoria shore. Looting and property destruction were reported by The Standard, although there were no immediate reports of injuries or arrests.

In a peaceful rally in Nairobi Friday, Nasa leaders compared the Kenya situation to Tahrir Square in Egypt and its symbolic role in the Arab Spring movement.

The Nasa coalition has promised nationwide protests each Monday and Friday ahead of new elections, following the Supreme Court decision to overturn results of the August 8 election that gave President Uhuru Kenyatta and the Jubilee Party a victory. The initial results showed Kenyatta receiving 8.2 million votes, or 54 percent, to Odinga’s 6.8 million, a decision that Odinga challenged in court.

The court’s ruling, described as a ‘monstrous injustice’ by Kenyatta, paved the way for new elections. Yet Odinga’s party and its supporters threaten to boycott the process unless changes – including the removal of IEBC officials responsible for managing the initial election – are made in the increasingly tight time window before Kenyans go to the polls again.

Protests in Nairobi, Mombasa and across the nation have been met with riot-control police shutting down the crowds. Extra security personnel are deployed to hotspots including IEBC headquarters, while the University of Nairobi has been closed.

A large fire at a Nairobi market on Friday was deemed suspicious and under investigation, but it wasn’t known if the Gikomba fire was related to the tense electoral situation.