Home>News>Kenya: Nasa sends formal election withdrawal letter to IEBC
By AT editor - 11 October 2017 at 3:43 am 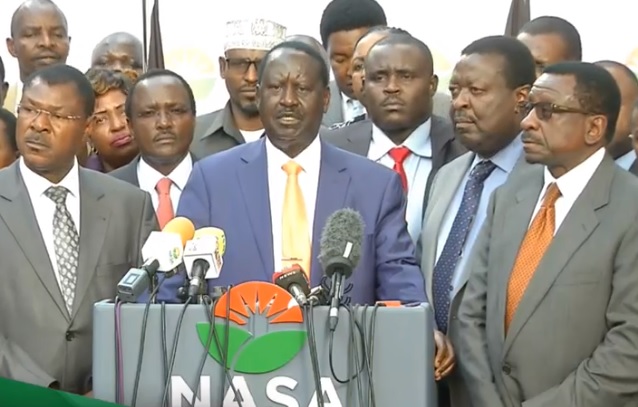 Kenya’s electoral commission says it has received official word from political opposition candidate Raila Odinga and the Nasa party confirming their intent to withdraw from the October 26 elections that followed the unprecedented overturning of President Uhuru Kenyatta’s victory in August.

The letter sent to the Independent Electoral and Boundaries Commission (IEBC) apparently makes good on Odinga’s promise to boycott new elections mandated by a controversial Supreme Court ruling. The Nasa party has for weeks demanded procedural changes and the removal of officials involved in the August 8 election contested by Odinga.

“We are reviewing the said letter with support from legal counsels and will advise on the way forward in due course,” said IEBC chairman Wafula Chebukati in a statement.

Odinga, speaking at a Tuesday press conference, said the IEBC “has stonewalled meaningful deliberations on the necessary reforms to ensure that the elections on the twenty-sixth of October are free and fair.”

The Nasa decision, he said, is based on the conclusion that the IEBC has no intention of making the changes the party demands.

Kenyatta and his Jubilee Party welcomed the decision. The president said the country was ready to move on, and he felt confident that the August victory he claims as legitimate will draw Kenyans to support him again.

The initial results showed Kenyatta receiving 8.2 million votes, or 54 percent, to Odinga’s 6.8 million, a decision that Odinga vehemently refused to accept before Nasa filed a legal challenge against it and the court ruled 4-2 in favor of setting the results aside.