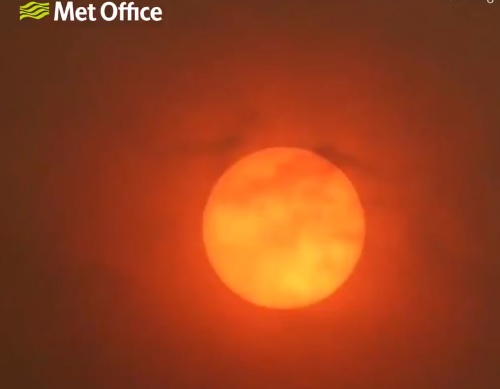 It’s not every day that you find “Sahara” trending on Twitter accounts in Ireland and England, but Monday was no ordinary day as thousands of people marveled at skies turned orange and yellow, and a sun turned a striking red.

People described “surreal skies” and a daylong eerie scene in London, where parts of the city grew dark as night in the middle afternoon. “Today the sky and sun had an incredible orange glow,” the UK Meteorological Office said in a short explainer video. “It may look like an Instagram filter but it’s actually the result of Ex-hurricane Ophelia.”

The thick layers of Saharan dust, coupled with smoke from wildfires on the Iberian Peninsula, were blown into northern Europe by the post-tropical storm Ophelia, according to meteorologists. The powerful former hurricane swept southeast of the Azores at the weekend, and then headed north in the eastern Atlantic Ocean just off the coast of Portugal and France before making landfall in Ireland.

The wind-driven particles of Saharan dust and the smoke from wildfires in Portugal and Spain scattered the blue light from the sun, letting more red light through and changing the sky colors, the Met Office explained. The phenomenon seen in the British Isles also appeared in the skies over extreme northwestern France.

The dust traveled with Ophelia, a major Category 3 hurricane found unusually far east and then north in the Atlantic before transitioning to a powerful post-tropical storm. At least three people were reported dead in Ireland as the storm swept across the country, with severe winds gusting to 156 kilometers per hour according to Ireland’s Met Éireann. The winds blew down the roof of the Cork City football stadium, and later pushed the waves of Galway Bay into the port and seaside streets of the city. Some 360,000 people were reportedly without power as Ophelia headed north and into Scotland.

Portugal, meanwhile, grieved the loss of dozens of people who died in wildfire flames driven by the storm’s high winds. Investigators say they’re looking at the possibility that some of the fires were intentionally started.