Home>Commentary>Farmaajo's challenge: Extremist defiance in a wounded and fractured Somalia
By Laureen Fagan - 18 October 2017 at 4:11 am 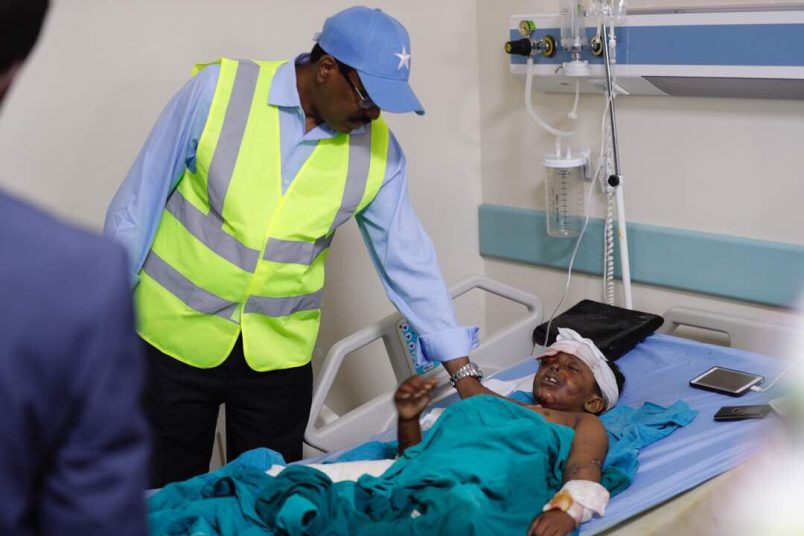 The death toll in Somalia has now reached more than 300 people following the worst bomb attack to ever happen in the Horn of Africa nation. The massive truck bomb that exploded Sunday at the KM5 junction in Soobe, one of the busiest areas of Mogadishu, also left hundreds of people injured.

The city is no stranger to frequent attacks, many claimed by al-Shabaab militants. Yet the scope of these attacks – with 160 bodies buried by the government because they couldn’t be identified, and little trace of others at all – has stunned both Somalia and the international community. Offers of medical assistance came quickly from Kenya and Turkey, with some 35 victims airlifted to Istanbul for treatment.

“We stand by Somalia in the fight against terror and will tirelessly continue to help it recover from such atrocious attacks,” said Mevlüt Çavuşoğlu, the Turkish Minister of Foreign Affairs, in a statement.

The United States also offered condolences and praised the heroic response of Somalis helping in the crisis. At least three of the victims were Somali Americans, including Ahmed AbdiKarin Eyow, a father of three who left Somalia in the 1990s but wanted to rebuild his homeland and was visiting Mogadishu.

“Such cowardly attacks reinvigorate the commitment of the United States to assist our Somali and African Union partners to combat the scourge of terrorism to promote stability and prosperity for the Somali people and their regional neighbors,” said the U.S. Mission to Somalia in a statement. The members of the United Nations Security Council condemned the attack while appealing to all states to assist Somalia as necessary to ensure that those responsible for terrorism are brought to justice.

African Union head Moussa Faki Mahamat called on the Somali government to show renewed unity, and asked the international community for assistance. “It is now clear that without adequate and appropriate support to Somalia, many of the security gains made in recent years could be reversed,” the AU chairman said.

No, it won’t. Yet the optimism that followed Farmaajo’s election in February is wearing thin as the country’s struggle to achieve stability sees setback after setback. The ambitious project of forming a new government was no small task and the work continues in the political space, but also – as Mahamat and others warn – on security. The roadblocks to a smooth process extend to fiscal policy, civil society initiatives and more, with an overarching humanitarian crisis that includes drought and disease.

Somalia’s original plan to hold an August 2016 general election was first modified to a more inclusive system of delegates drawn from clustered communities across its ethnic and geographic divisions. The decision meant for a more participatory process, but a much slower one that saw repeated delays as first the lower house of a new parliament was elected and then the MPs for the upper house. All of them needed to be in place before the presidential contest that Farmaajo won, and as the months went on so did episodes of fraud, electoral harassment, violence and frequent attacks by al-Shabaab militants.

The al-Qaeda linked terrorists have not claimed responsibility for this most recent attack, which is one of the most vicious to have ever occurred in the modern era on the continent, not just in shattered Somalia. Yet al-Shabaab has never given up the fight, and the truck-bomb incident in a crowded marketplace is consistent with other attacks on restaurants, military installations and government officials.  In April, the new president invited al-Shabaab to dialogue with the administration and gave the fighters 60 days to end the violence within an amnesty period. Beyond that, Farmaajo vowed, there would be no mercy in finally crushing the group.

The illusion of Somali unity

A defiant al-Shabaab scoffed at the threat and has doubled down on its attacks, most often in the busy streets of Mogadishu. Security analysts observe that the organization has maintained its strength even in the face of an increased intervention role for the United States and the June extension of the UNSOM mandate, which runs through March. The African Union forces in Somalia are slated to leave in October 2018, but there was already a move to replace AMISOM troops with Somali forces within Mogadishu.

Now that two drivers have detonated trucks so loaded with explosives that some of their victims have simply disappeared, there are questions about why the terrorists so easily evaded checkpoints into what is supposed to be a tightly controlled city. As the New York Times outlet noted in interviews with experts on Somalia, it is common knowledge that Somali security forces – as well as other structures within the new government – have al-Shabaab members embedded within them, and the goal of government unity under Farmaajo seems elusive if not entirely an illusion.

Last Thursday, just two days before the massive Mogadishu attack, Somalia’s top military chief and the defense minister both resigned without explanation. The International Crisis Group warned earlier this year that unless Somali leadership successfully reforms its security forces, international assistance won’t have any long-term impact in defeating al-Shabaab. This latest painful episode in Mogadishu, occurring as Somalia appears as politically and culturally fractured as ever, puts new pressure on Farmaajo and his claim to defeat al-Shabaab within two years and establish a Somalia that is making real progress.