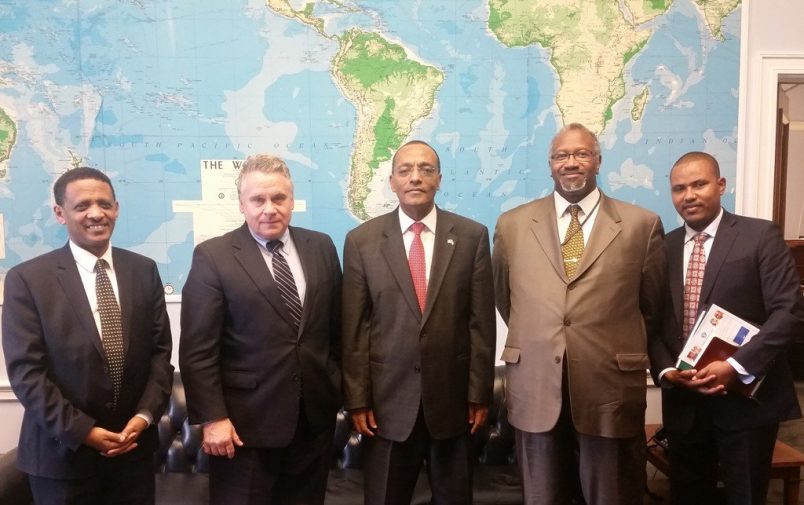 Human rights advocates are again calling on the United States Congress to move forward with a resolution they say the Ethiopian government has intentionally suppressed, using threats to withhold its cooperation on counterterrorism.

Legislators were supposed to vote October 2 on H.Res. 128, a measure calling for human rights protections and inclusive governance. It includes language to support targeted sanctions against Ethiopians responsible for gross human rights violations, and achieved strong levels of support from across the political spectrum following its introduction by Republican U.S. Congressman Chris Smith, seen above with Ethiopian ambassador Girma Birru and other officials in April.

Yet according to a congressman from Colorado, that vote was postponed because the ambassador warned the U.S. that if it went forward, his nation would pull out of its partnership on security and counterterrorism.

“The Ethiopian government vigorously fought all previous attempts to hold it accountable for abuses of human rights and democratic norms, and it has opposed the current measure from its inception,” said Yoseph Badwaza, a senior program officer for Africa at Freedom House. “In January 2017, it hired a Washington-based lobbying firm in an effort to kill H. Res. 128 and its companion resolution in the Senate.”

It was not the first time Ethiopia has hired lobbyists to quash U.S. legislative efforts focused on its human rights record.

“A strong, unambiguous signal from the US demanding concrete reforms is required to avert crisis and to create a path toward sustainable regional stability,” the letter said. “The passage of H.Res.128 represents an important first step in that direction and should not be derailed by last-minute bullying tactics. This would not be the first time the government of Ethiopia has made threats of this nature and it is worth noting they have never been carried through.”

In addition to Freedom House, signatories to the HRW letter include Amnesty International, the Ethiopia Human Rights Project, the Amhara Association of America and Oromo Advocacy Alliance.