Home>News>ECOWAS urges Gnassingbe to resolve Togo crisis
By AT editor - 26 October 2017 at 4:13 am 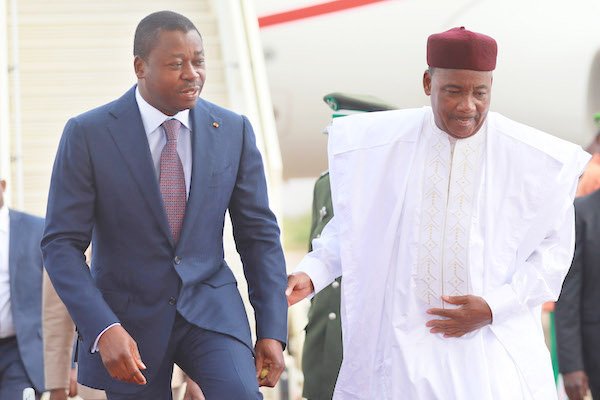 ECOWAS heads of state, following this week’s meeting in Niger, have called on Togo to begin an immediate dialogue on political reforms and curb the rising violence in the small West African nation.

President Alassane Ouattara of Côte d’Ivoire said that he and other leaders of the Economic Community of West African States expressed their concerns to Togolese President Faure Gnassingbe following weeks of protests. Thousands of people have thronged the streets of Lome and Sokode, with some 16 people killed and hundreds injured.

Ouattara, joined by President Muhammadu Buhari of Nigeria, among others, stressed the need for negotiations. Ghanaian President Nana Akufo Addo has expressed concern since August as his nation saw an uptick in people crossing the border from Togo, and sent a ministerial delegation to address the problem. The ministers discussed mediation between Gnassingbé’s government and opposition political leaders led by Tikpi Atchadam and his Parti National Panafricain (PNP).

The foreign minister of The Gambia has denied reports that he called on Gnassingbe to step down, insisting that the people of Togo must chart their own course.

The ECOWAS move follows a joint statement with the African Union and United Nations earlier this month that called on all sides to advance constitutional reforms. France expressed its concerns anew on Wednesday, as did the United States.

“We are particularly troubled by reports of excessive use of force by security forces and reports that Government-sponsored vigilantes are using force and the threat of force to disrupt protests and intimidate civilians,” the U.S. statement said. “The United States is also concerned with the Government of Togo’s decision to restrict demonstrations during the workweek and to arrest a prominent imam in the city of Sokode.”

Togo has been led by Gnassingbé since 2005, after he followed in the footsteps of a father who ruled from 1967 until his death. After 50 years of the dynasty, the opposition leaders say they want term limits enforced by constitution and a government that ensures human rights. The human rights situation in the small West African nation, home to some seven million people, is described by Amnesty International Togo Director Aime Adi as fragile.