Home>Articles>UN's Guterres wraps up visit to Central African Republic
By AT editor - 27 October 2017 at 4:14 am 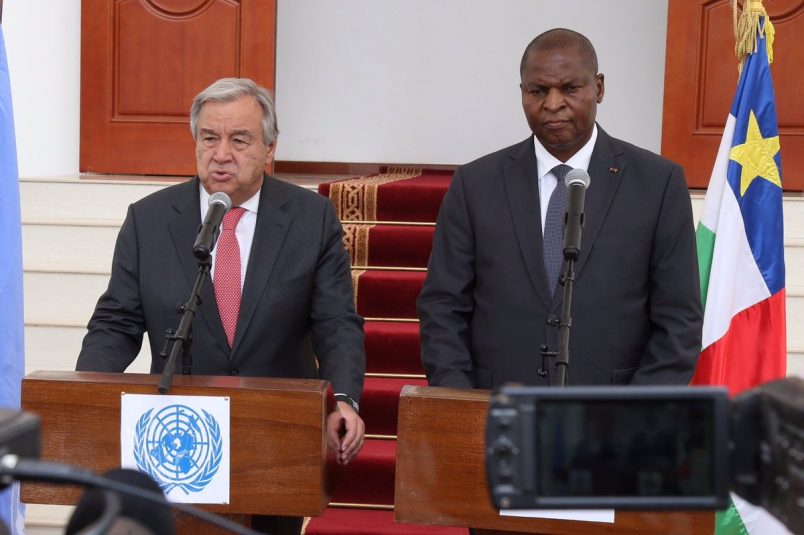 United Nations Secretary General António Guterres will wrap up his visit to Central African Republic on Friday after meetings this week with President Faustin-Archange Touadéra, African Union ambassadors and other key stakeholders.

Guterres noted that the UN Security Council has been asked to strengthen the capacity of the MINUSCA peacekeeping mission to better protect CAR civilians. He called on armed groups to end their fighting and join in a political process that will lead to national reconciliation.

“Central African religious communities – Christians, Muslims and others – have always lived together,” Guterres said. “It is imperative that political leaders, leaders of armed groups and community religious leaders call for genuine reconciliation, mutual respect, and the understanding that everyone must live together to build the new Central African Republic.”

The secretary general met with civil society and religious leaders, as well as with political party heads, stressing the need for their participation if CAR is to build a strong and vibrant civil society. The Guterres visit included a stop at M’poko airport, where he spoke with about 100 members of the UN military and police forces.

Guterres has called on the international community to support the conflict-ravaged CAR, saying that resources are needed “to ensure that government projects turn into a reality of peace, stability and prosperity.”