Home>Commentary>The U.S. in Niger: Does this surprise Africans as much as it does Americans?
By Laureen Fagan - 29 October 2017 at 1:08 am 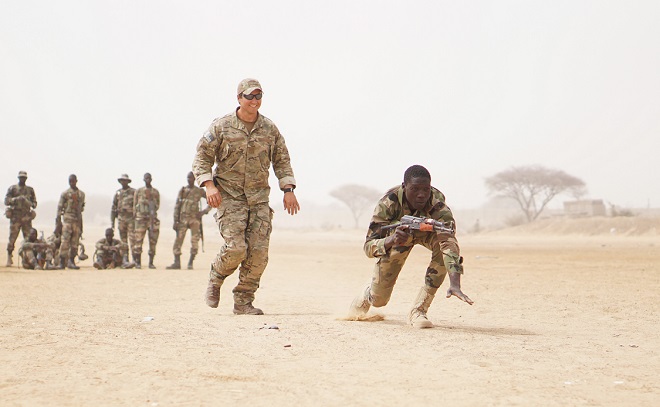 Decades ago, during the U.S. presidency of Richard Nixon and the war in Southeast Asia, political cartoonist Garry Trudeau of “Doonesbury” fame created some classic commentary on a U.S. Senate inquiry into “secret” bombing raids that weren’t in Vietnam at all, but rather in Cambodia.

The 1973 Sunday cartoon made the pointed observation that perhaps Americans were surprised and dismayed to learn of U.S. military operations in Cambodia, but it was hardly a secret to Cambodians.

This month’s upheaval over the “surprise” presence of U.S. special operations forces in Niger, and the deaths of four Americans serving there, brings that old and not-really-meant-to-be-funny cartoon strip to mind. Much of the American public – and for that matter, their elected officials in the U.S. Congress – finds the deaths of Staff Sgt. Bryan Black, Sgt. La David Johnson, Staff Sgt. Jeremiah Johnson and Staff Sgt. Dustin Wright in an October 4 attack to be an epiphany on the U.S. presence on the African continent.

U.S. President Donald Trump’s reported demeanor during a condolence call to La David Johnson’s wife created a predictably unsavory political sideshow to serious questions about U.S. presence and policy on Africa. So has Trump’s relative silence on the issue and claims – feigned or not – of his own ignorance on the operation.

“My generals and my military, they have decision-making ability,” Trump said on Wednesday, in a press encounter where he denied any direct role in specifically authorizing the Niger mission. “As far as the incident that we’re talking about, I’ve been seeing it just like you’ve been seeing it. I’ve been getting reports.”

The Niger incident, near the Mali border, appears to have elicited the kind of collective U.S. response seen after American losses in Somalia in October 1993 and, as Trudeau once noted, on the longer timeline of the Vietnam era before it. While U.S. officials are running to answer “what are we doing there” questions about the military’s role in Niger and a wider Africa, one wonders just how much of a surprise this story is to Africans.

“Americans should know what’s going on in Niger,” said Sen. John McCain, chairman of the Senate Armed Services Committee. Presumably, then, so should Nigeriens and their counterparts elsewhere, as local populations grapple with an expanding U.S. military presence now reported in nearly every country.

The Pentagon’s press briefing early this week came in response to “a perception that the Department of Defense has not been forthcoming,” according to Marine Corps Gen. Joe Dunford Jr., chairman of the Joint Chiefs of Staff. Dunford, at the request of U.S. Secretary of Defense James Mattis, provided more detail about the incident near Tongo Tongo and some answers to wider questions it has forced about Africa.

Dunford said the U.S. has, at various times, had forces in Niger for more than 20 years, predating the formal announcement of AFRICOM in February 2007. AFRICOM is still based in Germany, although that was not the original vision. The late Robert Moeller, then a U.S. Navy Rear Admiral who was AFRICOM founder, intended a headquarters on the continent and a holistic mission of military personnel working alongside diplomats, USAID officials and U.S. civil entities.

What Moeller did not foresee, he said at the outset, was any plan to put additional military forces in Africa beyond 1,700 already committed to Camp Lemonnier in Djibouti, or those engaged in what was then a relatively new Trans-Sahara Counterterrorism Partnership (TSCTP) that now includes 11 African nations. The U.S. Navy also was partnering with Ghana and other Gulf of Guinea nations on security.

Last Monday – some 10 years later – Dunford found himself explaining that there are more than 6,000 U.S. military personnel in 53 African countries. Which begs the question, who doesn’t have a U.S. presence?

No quick wins, and few surprises

Now everyone knows that in Niger, there are a stated 800 U.S. military personnel working with French and Nigerien counterparts on Sahel counterterrorism. In June, the United Nations Security Council (UNSC) approved the formation of a new G5 Sahel force made up of five African nations – Niger and Mali, but also Burkina Faso, Mauritania and Chad. It’s backed by the African Union and France, but the plan wasn’t welcomed warmly by U.S. officials who object to paying for it. That remained the case, Reuters reports, as the UNSC planned to revisit the G5 Sahel plan.

Reluctantly or not, the U.S. announced USD$60 million in support for the G5 Sahel force ahead of Monday’s meeting, yet the apparent reversal on funding still seemed to reflect the administration’s ambivalence on Africa, its partnerships, or coherent strategies on a number of fronts.

An October 2016 report on U.S. special operations in Africa finds “there are too many conflicting perspectives” when it comes to U.S. policy, but the solutions to instability “require at least a generation” to become effective. “Understand there is no quick win,” the document says. “This will be long-term.”

What’s clear is that the U.S. footprint has changed dramatically, whether in Djibouti – where there are now 4,000 troops – or in Somalia, Cameroon or at the new base at Agadez in Niger itself. So has the shift in extremist jhadi threats since AFRICOM was first envisioned. The U.S. operations to counter them occur in a local and regional context, though, and that presence isn’t really a “surprise” in many African regions where it’s rightly viewed with suspicion rooted in history and a wary eye over intent.