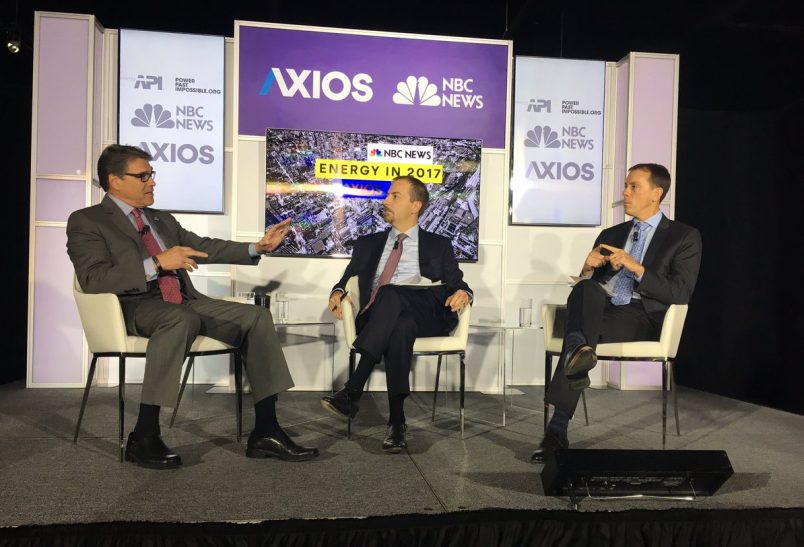 When he was in Cape Town last week, United States Secretary of Energy Rick Perry focused on Africa Oil Week and the role he sees for fossil fuels in supporting Africa’s fast-growing cities and economies. On Thursday, though, he raised a few eyebrows when he connected the dots between powering up Africa and preventing sexual assault.

Perry, left, held a discussion on U.S. energy priorities with news outlets NBC and Axios, and suggested that fossil fuels that keep the lights on are critical to preventing assault.

“I just got back from Africa, I’m going to finish up with this, because I think I heard a lady say there are people dying,” Perry said to the group. “Let me tell you where people are dying, is in Africa, because of the lack of energy they have there. And it’s going to take fossil fuels to push power out into those villages in Africa, where a young girl told me to my face, ‘One of the reasons that electricity is so important to me is not only because I’m not going to have to try to read by the light of a fire and have those fumes literally killing people.’”

But it’s also from the standpoint of sexual assault, he added.

“When the lights are on, when you have light that shines, the righteousness, if you will, on those types of acts,” Perry explained. “So from the standpoint of how you really affect people’s lives, fossil fuels is going to play a role in that. I happen to think it’s going to play a positive role.”

Perry may have a point about the wider issues facing African energy access, but Axios said the logic on sexual assault flies in the face of a British study, which suggests streets weren’t necessarily safer from crime or collisions with more lighting.