Home>News>UNESCO appoints Azoulay as new Director General
By AT editor - 10 November 2017 at 8:56 pm 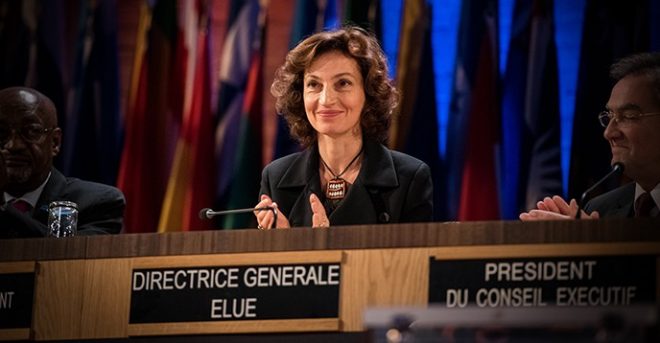 UNESCO on Friday announced the appointment of Audrey Azoulay as new Director-General of the United Nations educational and cultural organization. Azoulay, who was nominated in October, will take the place of outgoing Director-General Irina Bokova of Bulgaria beginning November 15.

General Conference President Zohour Alaoui congratulated Azoulay at the end of a vote that endorsed the choice of the UNESCO executive board. Her candidacy was endorsed by architects, artists and other cultural leaders from across the African continent and the world.

“I now think of all the people I met in recent months, or had met in my various professional capacities, who have great expectations from UNESCO,” Azoulay said in a statement. “I think of UNESCO’s mandate, which is strikingly modern. I think of all of you who are aware of the difficulties of the organization but who know that it is irreplaceable, that it is essential, in facing current global challenges and who aspire to the unity and serenity necessary to let it exercise its mandate to best effect.”

Azoulay was France’s Minister of Culture and Communication from February 2016 to May 2017. She has occupied senior positions in France’s public broadcasting sector and served as rapporteur to France’s public auditing authority, and as a European Commission legislative expert on issues of culture and the media.

Azoulay also has served France’s National Cinema Centre (CNC) in roles that included Deputy Director-General. She is a graduate of the Ecole National d’Administration and the Paris Institut d’études politiques, with a master’s degree in business administration from the University of Lancaster in the UK.

Ms Azoulay is the 11th Director-General of UNESCO and the second woman to occupy the position.