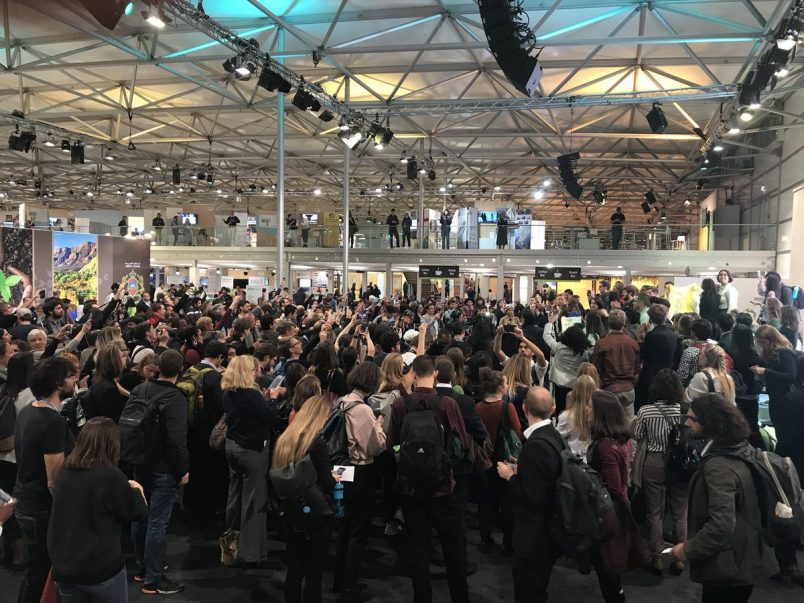 Climate activists gathered at COP23 in Bonn, Germany, walked out Monday as the United States government made an official presentation touting the role of coal in a sustainable energy future.

Activists with SustainUS who coordinated the protest said more than 100 people walked out of the U.S. session. “This White House panel of fossil fuel billionaires is a disgrace and an insult to the people of the U.S. and the world who are moving forward with bold climate solutions and want to stay in the Paris Agreement,” the group’s statement said.

Video of activists singing and chanting as they left the exhibit was quick to hit social media, as was a statement from Michael Bloomberg, a philanthropist and global climate champion who is former mayor of New York City.

“Promoting coal at a climate summit is like promoting tobacco at a cancer summit,” said Bloomberg, a United Nations special envoy for cities and climate change, in a statement. “It’s also a denial of what’s happening in the US – half of all American coal plants have been retired over the past six years.

“That trend will continue no matter what happens in Washington, and we are now working to help the rest of the world move beyond coal too,” Bloomberg added. “If the administration won’t lead it should at least get out of the way.”

That doesn’t appear likely, according to a statement from the U.S. Department of State issued Monday.

“The Administration’s position on the Paris Agreement remains unchanged,” the U.S. said. “The United States intends to withdraw from the Paris Agreement as soon as it is eligible to do so, unless the President can identify terms for engagement that are more favorable to American businesses, workers, and taxpayers.”

The U.S. added that it is “participating in ongoing negotiations under the Framework Convention as well as the Paris Agreement, in order to ensure a level playing field that benefits and protects U.S. interests.”

African activists said last week that they want the U.S. removed from Bonn negotiations. The Pan African Climate Justice Alliance (PACJA), based in Nairobi and led by Mithika Mwenda, circulated a petition among delegates calling for the U.S. removal. Mwenda said the target is the Trump government but not the American people they know want climate action.