Home>News>Despite ICC warrant, Uganda rolls out red carpet for Sudan's Al-Bashir
By AT editor - 14 November 2017 at 6:04 am 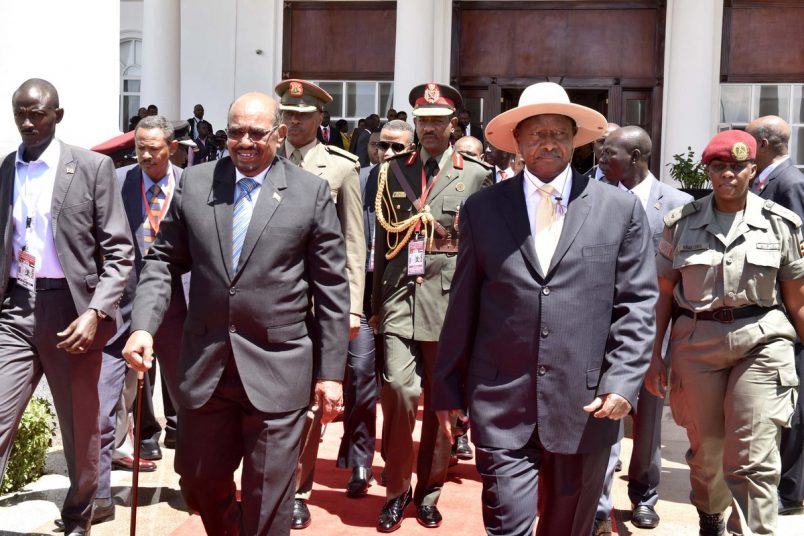 As President Yoweri Museveni of Uganda hosts Omar Al-Bashir of Sudan for a state visit, human rights advocates have again called on an African head of state to arrest the Sudanese president and turn him over to the International Criminal Court (ICC).

The International Justice Project noted Monday that this is the second visit Al-Bashir has made to Uganda in as many years, again without any action on two outstanding warrants issued by the ICC in 2009 and 2010. It’s a common refrain when Al-Bashir has traveled abroad in ICC-signatory nations, including South Africa, and his case is often cited among African nations considering or choosing to leave their Rome Statute obligations.

“The suspect is still at large,” says the ICC, whose charges include three counts of genocide in Darfur. Yet in April, during a conference on justice and courts in Khartoum, a defiant Al-Bashir called on African leaders to abandon the ICC in favor of a pan-African system. Burundi has done so, and nations including Zambia have said they are reviewing their commitment in line with an African Union directive.

“We don’t need a foreign or external assessment that serves specific agendas and uses criteria irrelevant to our values and customs,” al-Bashir said, calling the ICC a colonial tool wielded against African nations and driven by foreign interference in the continent’s sovereign affairs.

For his part, Museveni greeted the Sudanese president with a red-carpet welcome and a 21-gun salute, as well as a Uganda Police Force honor guard. Museveni said the two discussed regional security, trade and foreign affairs, and plan a summit in Khartoum to attract more Arab investors to Uganda.