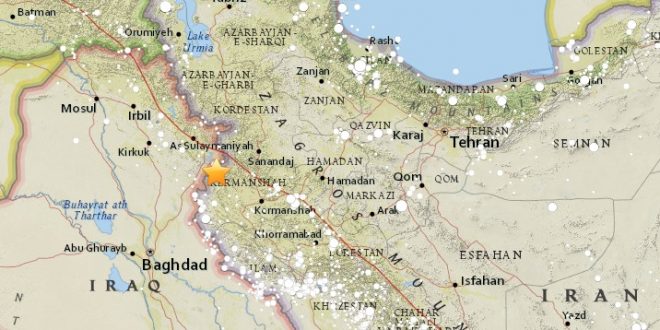 The governments of Egypt and Sudan joined the international community in extending condolences to Iraq and Iran following a devastating 7.3-magnitude earthquake that struck a border region Sunday.

Sudan’s Ministry of Foreign Affairs said the country stands in “solidarity and sympathy” with both nations, and “with the people of Iran and Iraq in their plight.” Egypt, meanwhile issued a similar statement that “addressed sincere condolences to the families of the victims, affirming that Egypt stands with the peoples of Iraq and Iran in such ordeal.”

The earthquake struck at 9:18 p.m. local time with its epicenter on the Iranian side of the border in Kermanshah province, the United States Geological Survey said. That’s about 200 kilometers northeast of Baghdad, and 400 kilometers from Tehran to the east. At least 530 people have died in the Kurdish region, with most reported fatalities on the Iranian side of the border. Eleven have died in Iraq.

More than 8,000 people were injured in the quake, which caused building collapse, landslides and power outages. The Darbandikhan Dam, just west of the quake epicenter in Iraq, was damaged but has not failed. Video from the dam’s control room CCTV cameras showed massive boulders falling as the earthquake – the worst in Iran since 2003 – struck the dam site.

Iran’s PressTV said the quake tremors were felt in eight other countries, including Turkey, Kuwait, Lebanon, Saudi Arabia and Qatar. Despite the region’s fragile political situation, condolences and offers of assistance came from Armenia, Syria, Russia, Turkey and a host of other nations alongside Egypt and Sudan.

Ayatollah Seyyed Ali Khamenei has called on all Iranians to support the relief efforts, while United Nations head António Guterres promised assistance if needed and expressed his condolences as well.