Home>African Future>Niger's Issoufou says slave trade of 'another age' must end - but when?
By Laureen Fagan - 21 November 2017 at 8:32 am 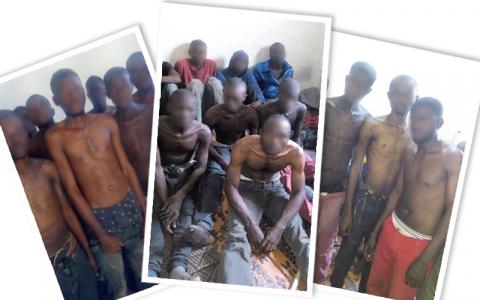 The international news coverage on Libyan slave markets over the past week has resulted in a lot of issued statements, coming from outraged and passionate Parisian street protesters to British sports heroes to presidents and diplomats. “I am here because I saw my brothers sold in Libya as tomatoes on a counter, I saw my brothers killed like chickens on a farm and nobody says anything!” a protester from Gabon told Le Monde in Paris.

Now everyone is saying something. The real question is will they do something, finally, and if so, what? And when?

On Monday night, President Mahamadou Issoufou of Niger – a transit country struggling to cope with migrant trafficking as well – appealed to the International Criminal Court to take up the case. He also insisted that the plight of Libyans caught in slavery, what he has called “this practice of another age, which we believe forever gone,” be put on the agenda for the African Union-European Union summit in Côte d’Ivoire at the end of the month.

Also on Monday, United Nations head António Guterres issued his statement. “I am horrified at news reports and video footage showing African migrants in Libya reportedly being sold as slaves,” Guterres said. “Slavery has no place in our world and these actions are among the most egregious abuses of human rights and may amount to crimes against humanity.”

Moussa Faki Mahamat, chairman of the African Union (AU) Commission,” said he urges swift action and “welcomes the announcement by the Libyan authorities of an investigation into these criminal acts and looks forward to a credible outcome.” The AU response of both Mahamat and Guinean President Alpha Condé point to what may be the most important statement on the matter: that of Libya’s government itself. Ahmed Omar Maiteeq, the deputy leader of the Government of National Accord (GNA), promised on Sunday that Libya was “assigning competent commissions to investigate the reports.”

The migrant abuse before Libya’s fall

The universal condemnation of this Libyan migrant tragedy, while welcome, needs to be followed by meaningful action this time. That’s exactly what Guterres and others have called for, and it’s well past time they do because although the latest CNN reporting has exploded into people’s consciousness across the globe, concerns over slave trading in Libya have been reported for months and, in a sense, years.

It was March 2011, just weeks after Libya’s Days of Rage sparked the fighting that destroyed a nation, when the International Organization for Migration encountered a young man from Ghana among a group of 50 seeking to flee the fighting. The group was among 213,000 migrants who fled Libya in a matter of days, trying to get out of a volatile Tripoli amid rumors that Libyan leader Moammar Gaddafi had hired Africans to fight for him. They were seen as collaborators, and needed to get to Tunisia.

They also were abused by human traffickers and had not been paid for their work. At the Ras Djadir border crossing, one told IOM he was routinely cheated of half his wages and had seen none at all in the past two months. That was after paying USD$1,000 to the smuggler who took him to Libya in 2009, and spending much of whatever money he had saved while trying to escape from a Libya that was unraveling. The Ghanaian had never planned to stay in Libya more than six months before moving on to Europe – it was the time in which he thought he’d earn money for the journey – but he was trapped without his wages.

So it was nearly a decade ago that Boateng Aduah left his home in sub-Saharan Africa, before Gaddafi was deposed and before the rise of Islamic State and before Libya became a shattered ghost of what once was. Yet for all the legitimate emphasis on the lawlessness of a failed state, its porous borders and the migrant routes that run through it when framing Libya’s migrant abuses, the young Ghanaians already knew this harrowing migrants’ tale.

They also gave the same reason for taking the risks. “I have never given up on the dream of good life,” Aduah said six years ago. “I cannot achieve my dream in Ghana. How can I get married, have children and send them to school when I am jobless?”

No excuses, no more pretending

This week at IOM Libya, director Othman Belbeisi said he welcomes an investigation by the Libyan government. Yet in a fractured Libya, even a determination on whose jurisdictions and authority such an investigation might fall under is fraught with difficulty. There is no question that life for migrants has become what United Nations High Commissioner for Human Rights Zeid Ra’ad al Hussein described as inhuman – and that, in large measure, it’s because of European Union policies that OHCHR and others blame for the spike in trapped migrants and the slave market that it’s driving.

“We cannot be a silent witness to modern day slavery, rape and other sexual violence, and unlawful killings in the name of managing migration and preventing desperate and traumatized people from reaching Europe’s shores,” Zeid said. Though the complicity in this unspeakable suffering has become clear when it comes to Italy or France, and the French have stepped up to announce they’ll accept Libyan migrants, it should be equally clear that African nations can no longer turn away either.

Nor does it make sense to pretend the world didn’t know this was happening. It’s been seven months since IOM in both Libya and Niger documented a “torture archipelago” where people were bought and sold in open-air markets, including Sabha. “There they become commodities to be bought, sold and discarded when they have no more value,” said Leonard Doyle, chief IOM spokesman in Geneva, in a widely reported statement last April.

Yet ultimately, what can’t be ignored is that it’s been years now since a young Ghanaian man fled in terror as Gaddafi’s Libya fell apart, but the economic and political drivers that pushed him there are still pushing thousands of new African migrants into the hands of human traffickers and slave markets.

Guterres, with years of experience as head of the UN High Commission on Refugees before becoming Secretary General, well understands the humanitarian suffering. He also reminded on Monday that it’s the economic, climate, conflict and other root causes driving the migration, and it’s the development solutions and legal pathways that are needed to ensure that the slave markets of Tripoli – and elsewhere – are closed forever.