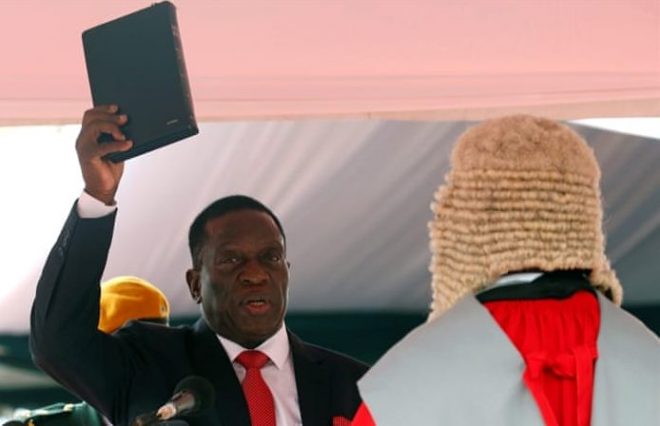 Emmerson Mnangagwa was inaugurated as president Friday in Zimbabwe, before packed crowds at the National Sports Stadium in Harare.

Mnangagwa replaces the 93-year-old Robert Mugabe, whose resignation after 37 years in power was forced by a political crisis within his Zanu PF party and backed by the nation’s military last week.

The former vice president was ousted by Mugabe on November 6 as party rivalries over who would succeed the president came to the breaking point. Mnangagwa went on to take office instead of Mugabe’s wife, Grace, whose ambitions – and political supporters – were thwarted by the military takeover and subsequent negotiation of Mugabe’s resignation.

In his inauguration address, Mnangagwa urged Zimbabweans to celebrate Mugabe’s legacy “for all times” and to “let bygones be bygones,” indicating his support for assurances that Mugabe will not be held accountable for the political violence or financial dealings of his oft-despised tenure.

Mnangagwa stressed domestic affairs in a speech that touched on controversial land reforms, which he said will continue, while vowing that Zimbabwe’s economic policies will stay rooted in agriculture.

“There’s an urgent need to tackle the high levels of unemployment,” the new president said, inviting Zimbabweans in the diaspora to return and lift the nation. He also addressed the global community, ensuring that international investments are safe but also firing off a warning on diplomatic affairs.

“In the global world, no nation can survive in isolation,” Mnangagwa said. “Whatever differences that existed with those that imposed sanctions on Zimbabwe should pave way for a new beginning.”

Mugabe did not attend the ceremony, although international leaders including longtime critic Ian Khama, the outgoing president of Botswana, were on hand.