Home>News>Kenyatta emphasizes health care, open borders in inauguration speech
By AT editor - 29 November 2017 at 7:07 am 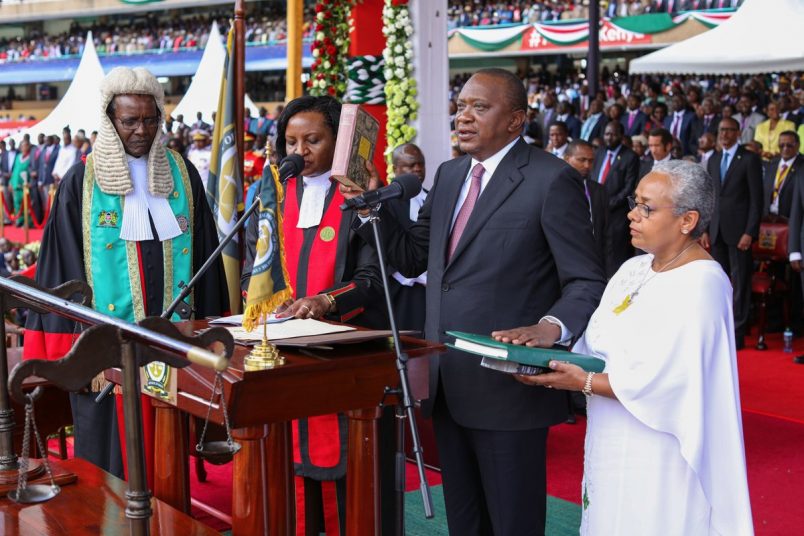 President Uhuru Kenyatta was inaugurated for a second term Tuesday in Nairobi, as Kenyans packed into the Safaricom Stadium for the ceremonies.

Kenyatta promised to be the leader of all Kenyans in a speech that promoted unity following this year’s divisive electoral contest, while laying out his plans for the coming term.

“I undertake to be the custodian of the dreams of all, and to be the keeper of the aspirations of those who voted for me and those who did not,” he said. “I will be the president of all. And I will devote my time and energy to build bridges to unite and bring prosperity to all Kenyans.”

The nation’s electoral commission, courts, security agencies and other institutions were tested by the  2017 election process but proved themselves resilient, he said. Beyond unity, Kenyatta said his next priorities include universal health care, affordable housing and continued infrastructure development.

Kenyatta also introduced a new travel plan in a pan-African spirit, to help put an end to what he described as “political balkanization” among African nations.

“I am directing that any African wishing to visit Kenya will be eligible to receive a visa at the port of entry. To underscore Kenya’s commitment, this shall not be done on the basis of reciprocity,” the president said. “The freer we are to travel and live with one another, the more integrated and appreciative of our diversity we will become.”

Kenyatta was re-elected in a second election in October after the initial results of August 8 were set aside by the country’s Supreme Court. That decision followed a successful legal case initiated by opposition candidate Raila Odinga and the Nasa coalition, who challenged the legitimacy of the original election.

Odinga and his supporters boycotted the second election and have refused to concede victory to Kenyatta. Odinga and Nasa subsequently launched the National Resistance Movement and seek to register it as a political party in Kenya, with plans for an Odinga “inauguration.”

Odinga and Kalonzo Musyoka are “the legitimate President and Deputy President of the Republic of Kenya” recognized by the group, it said in its statement.