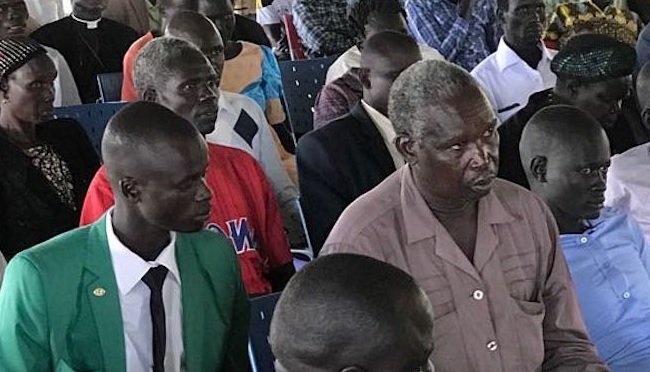 Nhial Deng Nhial, an adviser to Kiir, said Tuesday that SPLM-IO’s Machar is making demands likely to derail any progress and “conducting himself in a manner indicative of someone not willing to participate in the reunification of the SPLM.”

He told the Sudan Tribune that examples include Machar’s refusal to participate in meetings hosted by President Yoweri Museveni in Uganda, part of a renewed effort by the regional Intergovernmental Authority on Development (IGAD) to bring peace to South Sudan on the basis of an existing 2015 agreement. IGAD said Tuesday that it plans its next ministerial meeting on the South Sudan effort in December.

Yet Machar remains in South Africa, Uganda historically has backed Kiir with military support since civil war broke out in 2013, and SPLM-IO officials say that as long as Machar cannot actively participate in those negotiations they are unlikely to succeed. SPLM-IO is currently represented in the talks by Taban Deng Gai.

The third part of the peace process – Kiir’s national dialogue, proposed last December – has yet to achieve meaningful outcomes with conference timelines pushed back into 2018 and planned elections that remain in question.

Meanwhile, the violence and suffering continue. Some 50 civilians died, including humanitarian aid workers, in an ethnically-driven attack on Tuesday morning when the Murle group attacked a Dinka village. “I utterly condemn these killings and the abduction of some 60 women and children which accompanied these attacks,” said David Shearer, United Nations special envoy with UNMISS.

The attack undermines ongoing peace and reconciliation efforts in the region, he added.