Home>News>Macron arrives in Ghana after AU-EU summit meets with mixed reviews
By AT editor - 30 November 2017 at 9:14 pm 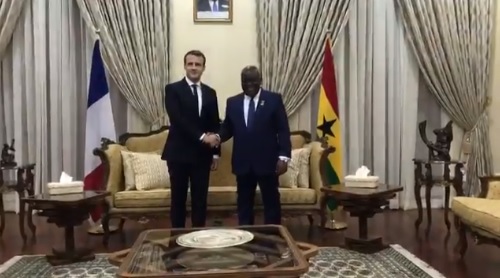 President of Ghana Nana Akufo Addo welcomed France’s Emmanuel Macron to Accra on Thursday, fresh from an African Union-European Union summit in Abidjan that was laser-focused on the crisis in Libya but, according to critics, at the expense of real diplomatic advances on pressing issues.

Akufo Addo has been outspoken on Libya’s migrant issues, condemning reports of enslaved African nationals and vowing to bring Ghanaians home safely. It’s been the response of many African leaders in recent days.

“The current slave auctions of Africans in Libya are not only gross and scandalous abuses of human rights, but are also mockeries of the alleged solidarity of African nations grouped in the African Union (AU), of which Libya is a member,” said Akufo Addo, who has served as president for almost a year.

Macron, for his part, said he was “proud to be the first French president to visit Ghana” and has promised to advance development goals in Africa with an emphasis on the continent’s youth. Yet his efforts during a three-day visit that also included Burkina Faso and the Côte d’Ivoire summit have met with disappointment.

“If this summit is a deception, it’s a collective responsibility,” said Friederike Röder, the ONE campaign’s director for France and spokeswoman in Abidjan. “Despite the overwhelming consensus on Africa’s growing needs for investments in education, employment and empowerment, we’ve seen no new plans besides a quick fix to address the urgent situation in Libya.”

Röder’s was among many voices expressing skepticism over European influence and partnership with African nations, including what she called a “missed opportunity for the EU and AU to align their promises to the growing needs faced by Africa.” The summit concluded without new commitments, particularly on youth, and again focused on putting out fires rather than developing a long-term vision for the future, she said.