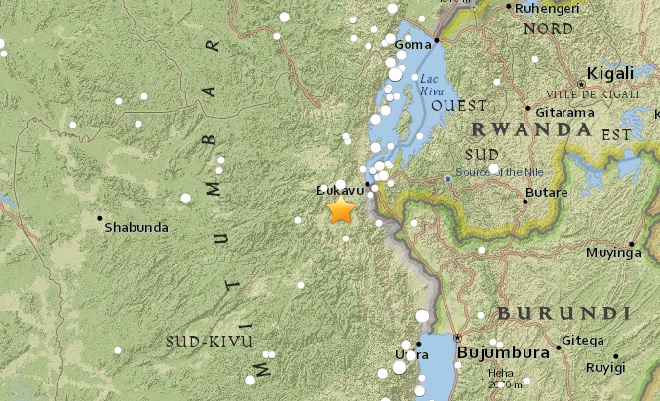 For the second time in 48 hours, a moderate earthquake struck Saturday evening near Lake Kivu in central Africa.

The 5.1-magnitude earthquake happened at 7:20 p.m. local time in the Kabare region of Democratic Republic of Congo, about 23 kilometers to the southwest of the lakeside city of Bukavu. The United States Geological Survey said the quake had a relatively shallow depth of 12.1 kilometers, while the European Mediterranean Seismology Center estimated a depth of 10 kilometers.

There were no immediate reports of injuries or damage in Bukavu, a city of more than 800,000 people, but the earthquake was felt across the region. Residents of Kigali, more than 250 kilometers away, said they felt the shaking, as did Rwandans near the opposite shore in Cyanguga. The quake’s epicenter also was about 100 kilometers from the Burundi capital of Bujumbura.

The quakes jolted a seismically active region of the African continent, where significant earthquakes have claimed lives in 2002, 2008 and 2015. The Kahele earthquake of 2002, a deadly 6.2-magnitude event that pushed Lake Kivu waters up into the town, prompted scientists to look at the relationship between a nearby volcanic eruption and the quake itself some eight months later.

The 2016 research results contributed to an understanding of how magma flows underground create stress that may cause quakes. The region also is on the geology radar because of high concentrations of volcanic gas – carbon dioxide and methane – that could cause what scientists call a limnic eruption. It occurs when toxic gases beneath the surface of the water are shaken to the top, with deadly results.

Lake Kivu contains at least 60 billion cubic meters of methane and 300 billion cubic meters of carbon dioxide, and researchers have long been concerned that a quake could cause the same kind of gas release that killed more than 1,700 people some 30 years ago in Cameroon, where similar conditions exist. Plans for gas and oil exploration on the lake, where about 2 million people live along the shores, have renewed concern over the rare phenomenon.