Home>African Future>Kenyatta talks pollution in UN Environment Assembly address
By AT editor - 6 December 2017 at 5:55 am 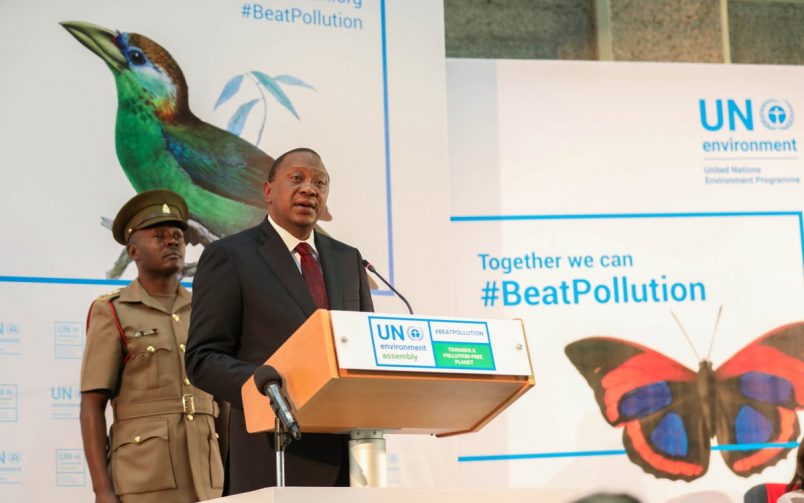 President Uhuru Kenyatta addressed more than 4,000 participants on Tuesday at the United Nations Environment Assembly in Nairobi, highlighting his country’s success with a nationwide plastic bag ban and tying the program and his remarks to this year’s theme of tackling pollution.

“The world gathers here today because we have learnt an expensive lesson: unless our environmental riches are protected by all, there can be no lasting prosperity for any of us,” Kenyatta said. “We in Kenya have learnt this lesson and have been taking appropriate mitigating actions.”

Kenya’s next step is to target air pollution, Kenyatta said, stressing the need for political leadership across the globe to implement solutions.

Research from the World Health Organization and UN Environmental Program finds that some 12.6 million people die each year because of environmental damage and agency chief Erik Solheim has called for concerted global action.

The impacts of trash, toxic soil, contaminated water and poor air quality disproportionately affect developing nations, and exacerbate the climate challenges already faced across Africa. One study cited by UNEP found that, for 42 countries in Africa, land degradation was costing an estimated 12.3 percent of their GDP.

“Given the grim statistics on how we are poisoning ourselves and our planet, bold decisions from the UN Environment Assembly are critical,” Solheim said in a statement. “That is as true for threats like pollution as it is for climate change and the many other environmental threats we face.”

The UN Assembly runs through Wednesday, with an emphasis on political leadership and partnerships, lifestyle changes, low-carbon tech investments, and advocacy. More than a dozen resolutions drawn from “Towards a pollution free planet,” a concurrently released UNEP report, are under consideration.

UNEP says there are viable solutions to improve water and energy efficiency by up to 80 percent in construction, agriculture, transport and other key sectors, while saving $2.9 – $3.7 trillion a year by 2030. “With over 60 percent of the urban infrastructure anticipated in the coming decades to be built, the opportunities to shape a better future are simply staggering,” the agency said.