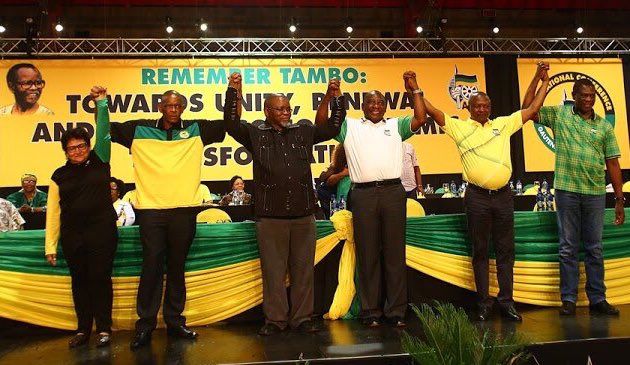 South Africa’s Cyril Ramaphosa has been named president of the African National Congress, after edging out Nkosazana Dlamini-Zuma in voting results released Monday. He replaces embattled President Jacob Zuma in the ANC leadership role, a move that takes Ramaphosa, now serving as deputy president, one step closer in the run-up to 2019 presidential elections.

The 65-year-old Ramaphosa has served alongside Zuma since 2014, and has been a longtime ANC stalwart dating back to the end of apartheid and South Africa’s transition to democracy. He served as chairman of the assembly charged with writing the new constitution following the 1994 elections, and now has promised to unite the deeply divided ANC and act on both public and private-sector corruption.

“We have had systemic challenges, we are looking at implementing foolproof systems that will assist us in managing risks and fixing problems,” Ramaphosa said of South Africa’s corruption issues, which have eroded public confidence. “We want to limit the temptation and ability for people to do wrong things.”

While many ANC supporters celebrated the news, party members who backed Dlamini-Zuma took solace in a six-member leadership team with at least a few members of their ANC faction elected. Meanwhile, opposition party leaders including Mmusi Maimane of the Democratic Alliance warned that Ramaphosa fails to represent meaningful change in the politically and economically unsettled nation.

“The truth is, no matter who leads the ANC, cabinet and policy direction is determined by the party, and it has been these ANC policies that have sought to withdraw South Africa from the International Criminal Court (ICC), kept poor people locked out of the economy, captured the mining sector, chased after an unaffordable Nuclear Deal, and increased unemployment with now over 9 million South Africans without a job,” Maimane said in a statement.

The DA leader called on Ramaphosa to appoint a new chief prosecutor to pursue any charges against President Zuma, clean up the state-owned entities at the core of South Africa’s corruption scandals, and appoint a cabinet based on competency and merit rather than patronage.