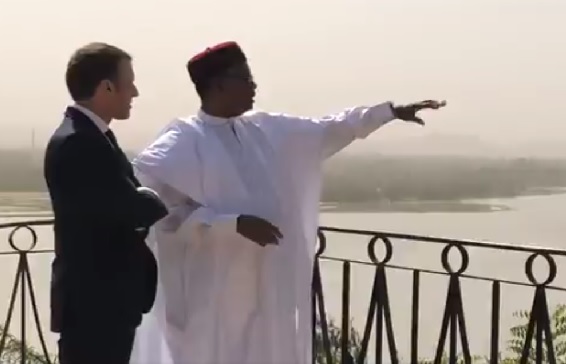 President Emmanuel Macron of France has announced €400 million (USD$474 million) in financial aid to Niger during his weekend press conference with President Mahamadou Issoufou in Niamey. Macron said the funding, planned through 2021, will support development in Niger and security in the Sahel.

His remarks alongside Issoufou, who Macron praised as a true example of democracy in the region, focused on France’s military commitment in the fight against terrorism. Equally, as has been the case during Macron’s frequent visits to the continent since his May election, the president emphasized France’s commitment to social and economic development tied to the root causes of migration. He praised Issoufou’s plans to improve access to education, and broader inclusion for girls and women.

The announcement was Macron’s latest as he presses for action in Niger and the wider Sahel, and it has come amid a flurry of European financial pledges and troop commitments (and those of Gulf nations as well) seeking to address what are seen as the twin threats of African migration and extremist terror risk.

Macron first traveled to Niger on Friday for a holiday dinner and visit with French troops serving with Operation Barkhane, greeting as well their counterparts from Germany, the United States and Canada.

“As you know, the Sahel is a priority,” Macron said in his address to the troops at Niamey Air Base. “This is where our security is at stake, that is where part of the future of the African continent is played out, but also probably part of our future. We must not leave the Sahel to the terrorist organizations that we are in the process of undoing in the Levant.”

Broader support for security in Sahel

Macron also acknowledged the progress of the G5 Sahel force, expected to be operational by March 2018 and widely viewed in part as an exit strategy for France’s troops. Last week in Paris, the French president hosted a summit of the G5 nations – Burkina Faso, Chad, Mali and Mauritania, in addition to Niger. African Union Commission Chairman Moussa Faki Mahamat also attended, as did German Chancellor Angela Merkel and other European leaders, alongside Saudi Arabia, the United States and United Arab Emirates.

Macron has met with some success in engaging European leaders on African security and development, as well as its links to the root causes of migration, particularly in the elevated awareness of Libya’s human rights abuses and accounts of trapped migrants sold into slavery.

On Sunday, Italian Prime Minister Paolo Gentiloni said he will introduce plans to reassign to Niger some Italian troops currently in Iraq.

Merkel, whose nation has some 1,000 troops serving in the Sahel, has promised about €1 billion ($1.18 billion) in Germany’s security assistance to the region through 2021. Yet under political pressure at home, she has muted the advocacy of liberal migration policies for Europe she first championed in 2015 at the height of the Mediterranean crisis. The Syrian tragedy was at the heart of Europe’s uneven response to the migration crisis, which has since shifted to primarily sub-Saharan Africa’s populations.

Saudi Arabia has pledged $100 million toward the G5 Sahel force, while the UAE is funding a G5 military training facility in Mauritania beginning in January. That brings the funding for the G5 force closer but still short of its first-year budget requirement of €423 million ($502 million).

France has vowed to accept 10,000 migrants trying to escape Libya, including 3,000 from camps in the Sahel nations of Niger and Chad, with the first of them arriving in France last week. A total of 227 migrants, including 137 from Eritrea, Somalia, Ethiopia, Sudan and South Sudan, have been evacuated from Libya to Niger, the United Nations refugee agency UNHCR said Sunday.

At the same time, the United Kingdom just announced more than £180 million (USD$240 million) in funding aid to the African continent, geared toward job creation and other economic impacts – yet not meant to welcome African migrants to Europe, but rather to again stem the tide of migrants headed for its shores.

“The sheer scale of the migration crisis in the Mediterranean makes it one of the most pressing global challenges we face, and behind the numbers are millions of individual tales of both hope and tragedy,” said British International Development Secretary Penny Mordaunt. “That’s why UK aid is working to help address the root causes of mass migration by creating jobs and providing education, whilst also supporting vulnerable migrants whose lives are at risk due to a lack of food and medicine, or whose freedom is at risk from traffickers and criminal thugs. The UK will be directly affected unless we take action now.”

The UK package is designed to support 450,000 migrants in Sudan through 2022, another 460,000 in Tanzania through 2020, and additional funding for humanitarian aid to migrants in Libya. Mordaunt says her office also is supporting the Jobs Compact with Ethiopia to create 100,000 jobs there – including jobs for asylum seekers in Ethiopia – and children’s education in Chad, as well as funding efforts that have returned 2,200 migrants to Libya and Niger.

Ramped-up efforts to help return sub-Saharan Africa’s migrants to their home countries from Libya have met with widespread support, including from Macron, despite his willingness to accept them in France. On Saturday, he reiterated France’s commitment to the African Union and the International Organization for Migration as they free trapped migrants from Libya and assist them in repatriation.

Yet European nations including both France and the UK have long been criticized for what Amnesty International calls “a policy of containment” on migration, beginning with the 2016 deal with Turkey that sealed off its border routes into Europe.

“By supporting Libyan authorities in trapping people in Libya, without requiring the Libyan authorities to tackle the endemic abuse of refugees and migrants or to even recognize that refugees exist, European governments have shown where their true priorities lie: namely the closure of the central Mediterranean route, with scant regard to the suffering caused,” said John Dalhuisen, Amnesty International’s Europe Director, earlier this month.