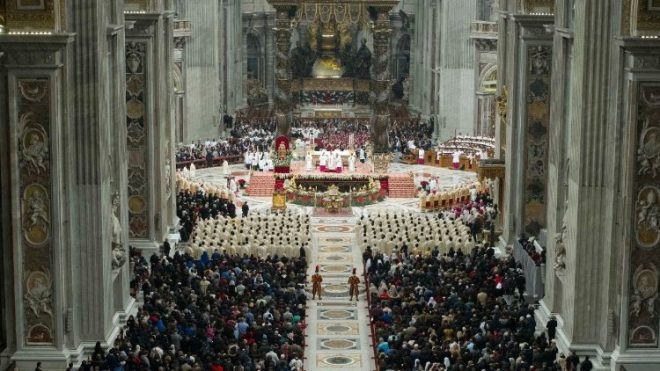 Pope Francis offered a message of hope for migrants across the world during Christmas Eve Mass at the St. Peter’s Basilica in Rome Sunday night, and called on the faithful to make room for the stranger in their worlds.

In recounting the story of Mary and Joseph’s pilgrimage to Bethlehem, central to the Christian accounts of the birth of Jesus, he drew parallels with the journeys of thousands of people seeking refuge from the crises and conflicts of today.

“At heart, they were full of hope and expectation because of the child about to be born; yet their steps were weighed down by the uncertainties and dangers that attend those who have to leave their home behind,” said the 81-year-old pontiff. “Then they found themselves having to face perhaps the most difficult thing of all. They arrived in Bethlehem and experienced that it was a land that was not expecting them. A land where there was no place for them.”

Yet it is there that hope arrives for “those who have lost their land, their country, their dreams; even for those overcome by the asphyxia produced by a life of isolation,” the pope said. The footsteps of millions leaving behind their homes, particularly for their very survival, are hidden in the footsteps of Joseph and Mary.

“Surviving the Herods of today, who, to impose their power and increase their wealth, see no problem in shedding innocent blood,” the pope added, calling on the human family to make room for the stranger and to develop “a new social imagination” in building our communities.