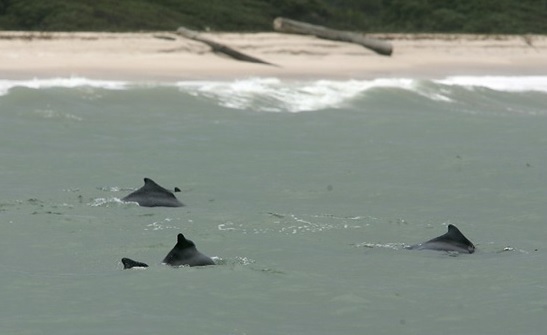 Scientists say they now consider the Atlantic humpback dolphin, a little-known mammal that lives only on the ocean coasts of Western Africa, to be among the continent’s most endangered alongside gorillas, African wild dogs and black rhinos.

An assessment released this week by Wildlife Conservation Society (WCS) and the International Union for Conservation of Nature (ICUN) said the dolphin has been moved from the “vulnerable” list to IUCN’s “critically endangered” list.

The Sousa teuszii dolphin populations likely have dwindled to less than 1,500 breeding adults, living in small groups within a 7,000-meter range that extends from Western Sahara to Angola. The gray dolphins, about 2.5 meters long at maturity with a hump just below the dorsal fin, rarely venture more than a few kilometers from shore.

“They are highly susceptible to human activities in coastal waters, and threats include entanglement in fishing gear, offshore construction such as port development, and hunting for human consumption,” the WCS said in a release on Friday.

Researchers said marine protected areas, including a newly created a marine network in Gabon, support conservation efforts in the fight against hunting, fishing bycatch and habitat loss. In June, President Ali Bongo announced the launch of the network including nine marine parks and 11 aquatic reserves that is now the largest in Africa.

“The new Critically Endangered listing will hopefully provide greater attention and resources to mitigate primary and cumulative threats faced by the Atlantic humpback dolphin, as well as proactive strategies for protecting the species and its vital habitats in key parts of the range,” said Howard Rosenbaum, Director of WCS’s Ocean Giants Program and a member of the IUCN specialist group focused on the dolphin.