Home>News>Tropical Cyclone Ava makes landfall on Madagascar
By AT editor - 5 January 2018 at 7:20 am 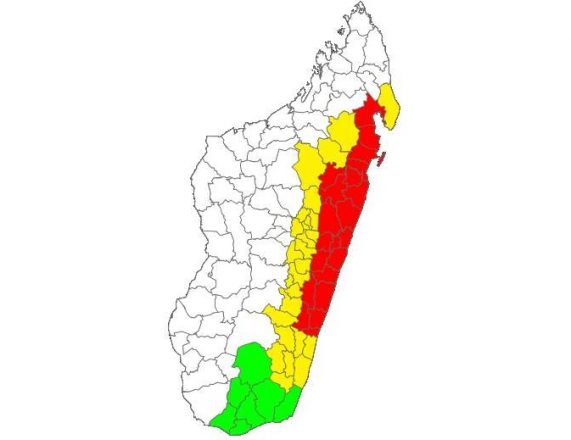 Tropical Cyclone Ava continued to track west-southwest across Madagascar’s eastern coast, where meteorologists reported a landfall near Toamasina on Friday.

Meteo Madagascar placed a red alert for the storm in parts of the country, asking local authorities and citizens to make preparations. That warning extends for the communities along the central eastern shore, while a yellow alert remains in place for regions to the inland west and south.

According to updates from the Joint Typhoon Warning Center, the storm Friday was moving at 6 knots, or about 11 kilometers per hour. The system was undergoing rapid intensification immediately before landfall, the JTWC said, with a storm intensity that was at 90 knots, or about 167 kph.

More recent sustained wind gusts at Tamatave have exceeded 70 knots with gusts to 83 knots. Although landfall has weakened the storm, conditions remain favorable for Ava to remain organized as the storm tracks south along the eastern coast. Heavy rain and flooding also are significant hazards.

The United Nations Office for the Coordination of Humanitarian Affairs (UNOCHA) said the storm is similar in strength and its pathway to Tropical Cyclone Jade in 2009. The Malagasy Bureau National de Gestion des Risques et Catastrophes (BNGRC) is carefully monitoring the situation and prepared to deploy teams to the eastern coast. Emergency officials said last year’s severe storm Enawo has helped them to develop their preparedness and response.